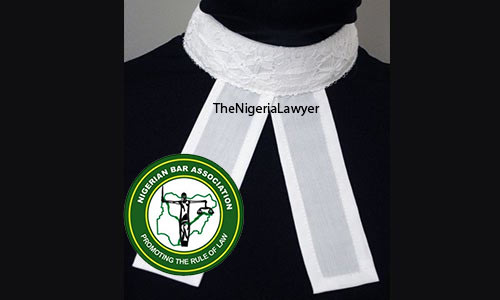 The First Vice-President of the Nigerian Bar Association, NBA, Mr. John Aikpokpo-Martins, has called the Inspector General of Police to intervene in a matter between the Ameosa Transport Company Nigeria Ltd and one Mr. Abel Mosheshe.

He said, “13/15, Cousin Mosheshe Close, Enerhen-Warri is the home of Mr. Abel Mosheshe and his siblings, same having been allocated to them by their father. They have lived there all their lives.

“The company stopped the demolition of their home upon being served with the writ of summons and other originating processes but failed to file any process.

“However, immediately the Judiciary Staff Union of Nigeria (JUSUN) proceeded on strike, the company returned to complete the demolition that they had initially stopped.”

Aikpokpo-Martins expressed concern that even when Mosheshe reported the company to Warri Police Area Command, the company refused to honor the invitation. Rather, the company approached the AIG Zone 5 of Benin City as a result of which Mosheshe was invited and detained by the Anti-Fraud Unit of the Zone

“Faced with a helpless situation, Mr. Abel Mosheshe petitioned to the office of the Area Commander, Nigeria Police Force, Warri vide a letter dated the 20/4/2021 seeking to halt the demolition; alas the demolition was completed.

” Nonetheless, upon the strength of the petition, the Warri Area Commander’s office invited the parties to a meeting fixed for 18/5/2021. The company not only failed to come for the meeting but approached the office of the AIG, Zone 5, Benin City to take over the case. The office of the AIG, Zone 5, invited Mr Abel Mosheshe to her office on 19/5/2021, which Mr. Abel Mosheshe dutifully honoured.

“However, Mr. Mosheshe was immediately detained by the O/C, Anti Fraud, Zone Zone 5, BENIN City. All applications and entreaties made to the said O/C, Anti Fraud have met with deaf ears.” the NBA VP said

He explained that his office has sought the assistance of both the O/C of Zone 5 and the Assistant Inspector General of Police but all without success as Mosheshe is still in detention. The NBA Benin Branch was also denied request to see the detainee

He called on the Inspector General of Police to call the office of the AIG Zone 5, Benin, to order

The petition reads in part, “John Aikpokpo-Martins, the NBA 1st Vice President whose office represents Mr. Abel Mosheshe had sought the assistance of the O/C, Zone 5 who intervened, yet the O/C Anti Fraud will not budge.

“The Chairman of the NBA Benin Branch went to see the said O/C, Anti Fraud, yet he refused to budge.

John Aikpokpo-Martins could not get the Assistant Inspector-General on call, but sent a text and WhatsApp messages to him, which same were acknowledged; still, Mr Abel Mosheshe is still being detained.

“The point must be made that it is the home and properties of Mr. Abel Mosheshe that has been demolished and destroyed, and his family now rendered homeless despite the fact that the subject matter is before a court of competent jurisdiction. He is the person that petitioned the Police through the Warri Area Commander’s office seeking to prevent the total demolition of his home and the destruction of his properties.

“Yet, the O/C, Anti Fraud, Zone 5, Benin City, and indeed the office of the AIG, Zone 5 have detained and refused to release the said Mr. Abel Mosheshe on bail whether conditionally or unconditionally.

“We are hereby calling on the Inspector-General of Police to call the office of the AIG, Zone 5, Benin to order. We insist that Abel Mosheshe must be released now and unconditionally. We hereby warned that should anything happen to Abel Mosheshe, that the O/C, Anti Fraud will be held responsible.

“The O/C, Anti Fraud (whose name we have been unable to ascertain) has displayed crass unprofessionalism, self-conceited arrogance, utter disdain for the rule of law and pitiable indiscipline and shameful disobedience to orders of superior officers. He is a shame to the Police Force.

“We make bold to say that we will ensure that he is made to contend with the rule of law sooner.”