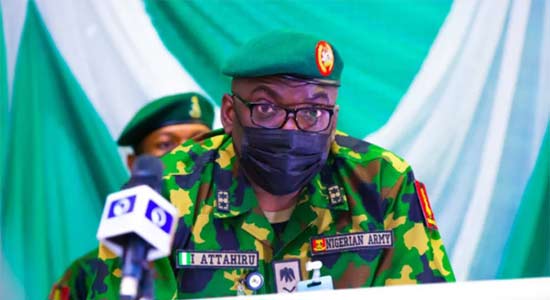 He said this in a short message on his official social media handle while debunking a claim that Attahiru’s wife was involved in the accident.

“It is incorrect; the wife is alive. May his gentle soul rest in perfect peace,” he tweeted.

Chief of Army Staff, Lt.-Gen. Ibrahim Attahiru, died in the crash on Friday.

A tweet by the Nigerian Air Force confirmed that the air crash, involving a @NigAirForce aircraft, occurred near the Kaduna International Airport.

The Air Force spokesperson, Air Commodore Edward Gabkwet, in the tweet, said that the immediate cause of the crash was still being ascertained.

The Nigerian Army regrets to announce the passing away of its Chief of Army Staff, Lt Gen Ibrahim Attahiru.

The sad event occurred following an air crash in Kaduna which also claimed the lives of 10 other officers including the crew.

The COAS was enroute Kaduna from Abuja on Friday, 21 May, 2021 when the unfortunate incident happened.

Details of the sad incident and burial arrangements will be communicated soon.

The COAS was enroute Kaduna from Abuja on Friday, 21 May, 2021 when the unfortunate incident happened.

Details of the sad incident and burial arrangements will be communicated soon.

The President, Muhammadu Buhari, described the air crash that claimed Attahiru, and other military officers as “a mortal blow to our underbelly.”

He regretted that the incident happened at a time men of the nation’s armed forces were poised to end the security challenges facing Nigeria.

The Special Adviser to the President on Media and Publicity, Femi Adesina, disclosed this in a statement titled ‘President Buhari expresses shock, sorrow over death of Lt. Gen. Attahiru, others.”

May their souls Rest In Peace! Ameen 🙏🏿 pic.twitter.com/4ztE5LJLar

Adesina quoted the President as consoling families of the deceased, the military, and Nigerians in general, describing them as “heroes who paid the ultimate price for peace and security in the land.”

According to the statement, while praying that God receives the souls of the patriots, the President said the crash “is one mortal blow to our underbelly, at a time our armed forces are poised to end the security challenges facing the country.”

The President pledged that the departed would not die in vain.