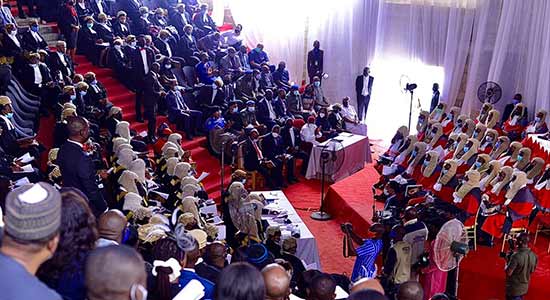 Several State Chief Judges, Federal Judges, Senior Advocates of Nigeria, legal practitioners and the general public gathered at Crescendo Event Center off Mariam Babaginda Road, Asaba, Delta State on May 20, 2021 at a book launch in honour of the Chief Judge of the state, Hon. Justice Marshal Umokoro who will be retiring on Monday 24th of May, 2021.

TheNigeriaLawyer learnt that the Governor of Rivers State, Nyesom Wike, was the Chairman of the book launch. The Governor was ably represented by the Rivers Head of Service

The occasion was also graced by Governor of the state, Ifeanyi A. Okowa, who hailed Hon. Justice Umokoro for leaving behind a legacy of judicial autonomy

The Governor on his Facebook page said, “Hon. Justice Marshal Umukoro is not only the Chief Judge to Delta State — his family has become part of our family, and he and his wife have become great friends to Edith and I.

“This is why, earlier today, I was honoured to speak about Hon. Justice Umukoro’s service to Delta State and the judiciary of the nation at large.

“As he retires from service, Hon. Justice Umukoro leaves behind a legacy of a stronger and autonomous Delta State judiciary, which will help to serve present and future generations of Deltans. We thank him for his exemplary service.”

One of the authors, Desmond Orisewezie, also took to his Facebook page to express joy over the success of the event. He appreciated the dignitaries and other lawyers who contributed to the book in one way or the other

“May 20, 2021: It was a lifetime privilege to have jointly produced a 528-paged book together with Professor Festus Emiri SAN which is titled Law and Society in Nigeria: Essays in Honour of His Lordship, Hon. Justice Marshal Umukoro, The Chief Judge of Delta State/Life Bencher.

“My book which was incorporated as part of the official state events marking the retirement of the Hon. Chief Judge, was attended by His Excellency Governor Ifeanyi A. Okowa of Delta State.

“I am grateful to the members of the Editorial Board: Samuel Agweh SAN, Associate Professor Johnny Okongwu, Mr. Andrew Odum, Mr. Freddie Eruli-Ede and Mr. Kester Chuks Oyibo for seeing to the success of this book’s production.

“Sincere gratitude to His Lordship, The retiring Chief Judge of Delta State, Hon. Justice Marshal Umukoro for granting me the necessary approval to do this awesome book.”