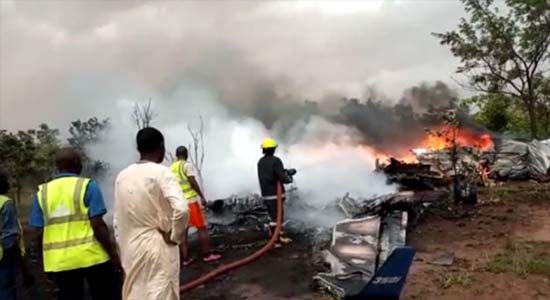 Soldiers have cordoned off the site where the Nigerian Airforce plane crashed on Friday evening at the Kaduna International Airport.

The plane which was carrying the Chief of Army Staff, Lieutenant General Ibrahim Attahiru, and other Senior Army Officers crashed near the airport’s active runway, killing all the eleven people on board.

Speaking on the incident, the Manager of Kaduna airport, Amina Salami told Channels Television that the military authorities have taken over the crash site.

She added that they have prevented civil aviation officials from gaining access to the crash site pending the arrival of officials from the Accident Investigation Bureau (AIB).

She explained that the military plane was initially scheduled to land at the Nigerian Airforce Base in Mando area, but was later diverted to the Kaduna airport due to poor weather conditions.

According to her, only the Accident Investigation Bureau will determine the actual cause of to crash.