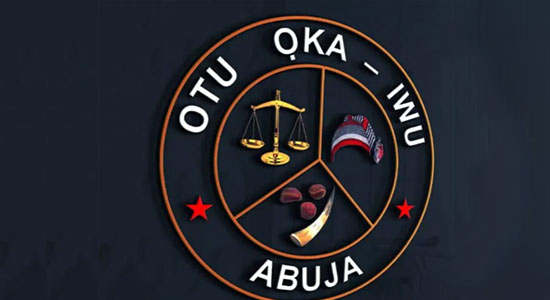 The President of Otu Oka-Iwu, Ejiofor Onwuaso Esq, has announced to give Palliatives to its members who are terribly affected by the ongoing Nationwide Industrial action of JUSUN.

The President in his statement on Saturday made available to TheNigerialawyer(TNL), noted that the decision is a sequel to the protracted industrial strike action by members of Judiciary Staff Union of Nigeria (JUSUN) which has made Courts to be under lock and key for about 6 weeks and still counting, the economic wellbeing of some members (especially litigation centered practitioners) has been negatively impacted upon in consequence of which survival has been a bit of challenge at this period.

“Cognisant of the fact that although we are all affected by the strike action in one way or another,  the extent of the impacts on our finances and survival vary in accordance with our capacities, level and practice specializations.

“In line with our avowed commitment as a welfarist centered administration, the EXCO has deemed it worthy that a free-will contribution should be initiated to provide palliatives support to some of our members who may be critically affected by the lack of litigation practice opportunities occasioned by the strike action in keeping with our ONYE AGHANA NWANNE YA philosophy.

“The Welfare Committee (to be immediately constituted) under the Chairmanship of Chief Okey Ajunwa shall urgently coordinate this initiative and work out the modalities for disbursement of the proceeds realized from the exercise.

“The Chairman of the Mentorship and Professional Development Committee ( Ezenwa Anumnu) has also been implored to immediately set the process in motion towards organising a mentorship masterclass on diverse practice areas and the need for multiple income streams as legal practitioners for the benefit of members”.

Onwuaso Esq, is also calling on members to assist in the donation for the Welfare of its people.

“I most passionately appeal to members to generously contribute as their spirit and goodwill dictate towards the palliative initiative.

TheNigerialawyer(TNL), recalls that JUSUN on April 6 directed its members to shut down all courts across the country; its members complied with the directive and mounted guard at the entrances of the courts to ensure that no one entered the court premises.