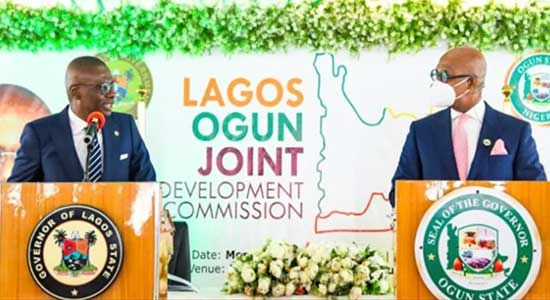 The commission, according to the two governors is a common alliance between the two states to jointly tackle issues bordering on security, sanitation, traffic and transportation, waste management, water supply, land use planning, infrastructure development and maintenance, urban renewal, and slum upgrading, among others.

Speaking at the signing ceremony, which took place at the Presidential Lodge, Ibara Abeokuta, Ogun State capital, the host Governor, Prince Dapo Abiodun said, the commission was a manifestation of the desire of the two states to attain rapid socioeconomic development and address the lingering boundary issues between both states.

He noted that it was important for the two states to work together in initiating and implementing more projects necessary to aid ease of movement of people, goods, and services, as well as increase industrialization along all border communities and ensure wholesome development of the states.

The governor hinted that a bill will be transmitted to the Houses of Assembly of both Ogun and Lagos States to give the commission the necessary legal backing.

He said, “We are cognizant of the fact that Ogun State is the only neighbour that Lagos has and that we are a natural overflow of Lagos. There is no how development in Lagos would not have a spiral effect or vice versa”.

He added the commission will focus on socio-economic development areas such as: “Infrastructure development, including the development of boundary town roads, waterworks, mass transportation by rail, road, and waterways.

Abiodun said, ” the MoU is the manifestation of the common dream that the nation’s largest economy and the nation’s industrial capital are forging because both are deliberate, focused and methodical to governance”.

He added, “from now onward, what you will see what will become the envy of others because our Joint Commission will now focus and cooperate on the social-economic development the two States”

These will include ” infrastructure development, including the development of boundary town roads, waterworks, mass transportation by rail, road and waterways; revenue and taxation, including PAYE remittances, border town revenue management and collection, signage and advertisement charges; trade and investment; resolution of boundary disputes; security, including information sharing arrangement on residents’ identification and other security and intelligence gathering and sharing”.

“I called this bilateral event a success story because whereas in the past, there might have been some initiatives between our two States but this is the first time that we will have a formal, structured framework of bilateral engagement that will be legislatively backed”, Abiodun said.

“What we are signing today, is a historic Memorandum of Understanding that takes cognizance of what had been envisioned, leading to the establishment of the Prof. Akin Mabogunje’s Committee on Redeployment of Lagos Megacity Region Plan in 2005-6”.

“Between the two of us – my brother governor and I, it is a mission accomplished and dream come true to put into action the thought about our two States forging a common alliance to jointly tackle issues bordering on security, sanitation, traffic and transportation, waste management, water supply, land use planning, infrastructure development and maintenance, urban renewal and slum upgrading for the mutual benefit of our people and the generality of Nigerians”.

“All these development imperatives have to be streamlined for us to be serious and focused. Law is not just a mere tool for development, this Joint Development Commission will function better to sustain these common goals and there is no better time than now to deepen not only the relationship between our two states but within any contiguous States in the country”.

“This MoU we are signing is a culmination of various efforts by State and non-state actors who have seen beyond the geographical delineation of our States. Already a number of State-owned institutions like the Nigeria Police, Nigerian Customs Service, and others have always recognized the twin or Siamese relationship between our two States and have always grouped Lagos and Ogun as one Zone under their respective High Commands”.

I must thank my brother governor, His Excellency Babajide Sanwo-Olu for his own cooperation, enthusiasm, and support for this initiative. Before now, together, we had jointly written, formally to President Muhammadu Buhari to release the Lagos-Ota-Abeokuta and the Ikorodu-Sagamu Roads for us to jointly reconstruct”.

One thing is clear, people do not care who and who is to execute a project or infrastructure, just as there are no federal people, state people nor local government people. What matters to the people is to get the job done. The two States are, therefore, important stakeholders in this Development Agenda”.

“If we jointly do this, there will be a development which will continue to increase employment generation, poverty alleviation, and food security”.

“The official launch of this Commission today will further initiate and accelerate more projects necessary to aid ease of movement of our people, goods, and services as well as increase industrialization along all our border communities and ensure a wholesome development of our dear States”.

Abiodun, therefore, called on the private sector to support and collaborate with the governments in the success story of the Lagos-Ogun Joint Development Commission.

“I enjoin every individual, corporate bodies, and other stakeholders to join us to make history. It is a new beginning for a solid foundation on which we can build the future of the two States. Together, we will realize our collective dream”.

On his part, the Lagos State Governor, Babajide Sanwo-Olu, described the commission as a development agenda for both states to combine resources to meet the present socio-economic needs of their people and prepare the states for the future.

He added that the commission will further stimulate socio-economic growth, bridge development gaps, and ensure that Lagos state’s megacity status is complemented by pervasive infrastructural development even in boundary towns.

Sanwo-Olu said, “The Memorandum of Understanding precedes the Joint Development Commission that will be established to mutually tackle some of the issues prevalent in key economic sectors like transportation, the environment, housing, health, infrastructure, and security”.

“Regardless of the challenges, we are determined to build more livable and stable cities. Our goal is to build sustainable urban cities, where the residents of Lagos and Ogun States have a sense of belonging, embrace participatory governance, and recognise their role in achieving solid urban economies in both States”.

“In light of current global practices in managing megacities, it has become obvious that the best way to accelerate socio-economic development in Lagos and Ogun States is by embracing a more collaborative approach for growth, development, and urban sustainability”.

“The Joint Memorandum of Understanding is a sustainable development agenda under which Lagos and Ogun States will combine resources to meet our present socio-economic needs and prepare for the future.”