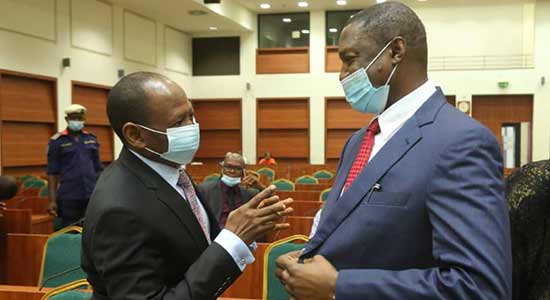 Members of the House of Representatives on Tuesday queried the Accountant General of the Federation, Ahmed Idris, over the borrowings from the assets recovery account by government agencies.

Specific reference was made to the sum of $23 million from the account, which is yet to be refunded.

Idris was grilled by the House of Representatives’ Ad-hoc Committee on Assessment and Status of All Recovered Loots Movable and Immovable Assets from 2002 to 2020 by Agencies of the Federal Government of Nigeria for Effective Efficient Management and Utilisation, headed by Adejoro Adeogun.

Chairman of the Committee, Adejoro Adeogun, who pointed that such instances abound, wondered if money can be taken from the coffers of the government without appropriation.

He said unless the Accountant General could provide evidence of the refund, it would be considered that such withdrawals were made illegally.

He said the committee would meet with the Accountant General on Thursday in a closed-door meeting to give a breakdown of such borrowings by government agencies and also to prove such monies have been refunded.

“What we are trying to draw attention to is that money is being borrowed out from the recovery account and not being refunded. Unless you are able to prove to us that it was refunded, we consider that to mean that payments have been made illegally,” Adeogun said.

The committee chairman pointed out most of the projects for which these government agencies borrow such monies have already been appropriated for in the budget.

The Attorney General of the Federation, who also appeared before the committee, said the National Assembly was slowing down effective management of recovered assets by the non- passage of the Proceeds of Crimes Bill.

The Bill, he said, has put in place effective mechanisms in terms of database, disposal, processes and procedure to manage recovered assets.

He said all these are lodged with the Central Bank of Nigeria (CBN) Account on Assets Recovery and the receipts of the amounts have been confirmed by the CBN.