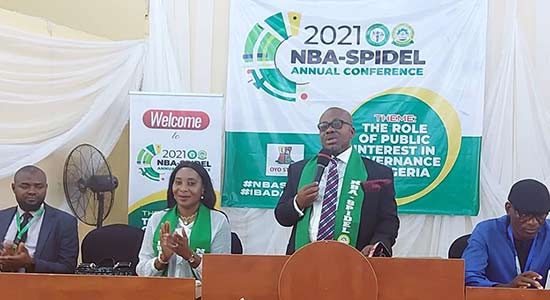 The Nigerian Bar Association says there is a need to have laws regulating the conduct of paternity tests across the country, to protect the rights of the Nigerian child.

This was made known in a communique issued by the NBA’s Section On Public Interest And Development Law (SPIDEL) at the end of her public interest annual conference which held at Jogor Centre, Ibadan, Oyo state on Wednesday.

SPIDEL, among other issues, decried the numerous reports of incidents of paternity fraud in Nigeria, while calling for caution in the handling of such a situation.

It also condemned the indiscriminate carrying out of DNA tests to determine paternity without any order of the court.

According to SPIDEL, the Nigerian society must deal with the causes of paternity fraud from the roots rather than concentrating on the criminalization of Paternity fraud.

SPIDEL also launched a human rights reporting app, noting that it will aid the general public in tracking and reporting human right abuses.

The communique read, “SPIDEL expresses deep concern at the numerous reports of incidents of paternity fraud in Nigeria and calls for caution in the handling of each such situation.

“SPIDEL decries the indiscriminate carrying out of DNA tests to determine paternity often without any order of the court and maintains that there is a need to have laws regulating DNA testing in order to protect the rights of the Nigerian child.

”SPIDEL resolves that rather than concentrating on the criminalisation of paternity fraud, the Nigerian society must deal with the causes of such acts from the root by eradicating certain barbaric laws against women.

”SPIDEL lauds the launching of the ‘Sorosoke’ human rights reporting app of the NBA and points out that this will aid the general public in tracking and reporting human right abuses.”

The conference also expressed deep concern at the spate of insecurity in the nation and called on the Federal Government to take urgent steps to ensure that the lives of citizens are protected.

It added, “SPIDEL views with deep concern, the frequent bloodletting in the incessant clash of farmers and herdsmen and recognises the need for an urgent intervention to stop this ugly situation. To this end, SPIDEL approves the ban on open grazing by some states of the Federation and calls on other states to adopt the ban by the institution of appropriate laws to prevent further clashes and ensure the preservation of lives.

”SPIDEL, therefore, submits that there is the need for the Federal Government to invest in and institutionalize ranching in the country.

SPIDEL called for a constitutional review and restructuring of the country. This according to the conference, is to ensure that each region is strengthened, security is ensured and all citizens have a sense of belonging.

”That the provisions of the Constitution in providing for the financial autonomy of the different arms of government be upheld. To this end, SPIDEL calls on State Governors to enforce judicial autonomy in their States and ensure the financial independence of the judiciary and the legislature. This will ensure that the judiciary is poised to deliver justice to the poor and oppressed without fear or favour.

“The Conference commends the National Human Rights Commission and the various State Governments for the setting up of the various Panels of Inquiry to investigate the human rights abuses which led to the EndSARS crisis. Every panel of inquiry set up by the Government of a State or the Federal Government is urged to administer justice to the people without being subject to the influence of any external forces.

”In relation to the provision of legal services for the indigent, SPIDEL commends the establishment of the Office of the Public Defender in Lagos State and calls on other States of the Federation to establish same, to ensure that legal aid is available and accessible to all especially the poor and vulnerable.

”SPIDEL decries the increasing spate of corruption by the political class, pointing out that corruption robs the citizenry of the basic amenities to ensure a stable and comfortable life. SPIDEL, therefore, urges the National Assembly to create guidelines on the Declaration of Assets of public Officers and the adequate interpretation and administration of same by the Judiciary.

“The Conference agrees that lawyers in representing their clients are social engineers who are merely carrying out their responsibilities as officers in the temple of justice to ensure that their clients’ right to representation is protected. Consequently, the allegation by the Economic and Financial Crimes Commission (EFCC) that lawyers aid corruption is misguided as it is in the public interest that anyone accused of financial crimes is entitled to legal representation by virtue of Section 36 of the Constitution.”