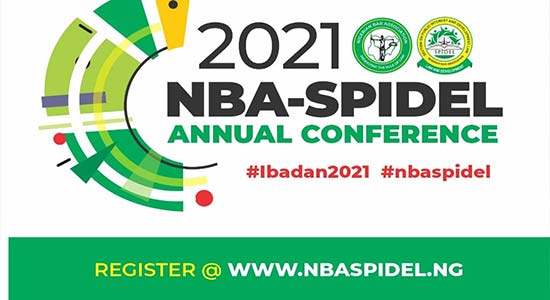 The Nigerian Bar Association (NBA) Section on Public Interest and Development Law (SPIDEL) has concluded its 2021 annual conference which held at the Jogor Center, Ibadan, Oyo State. Among salient issues addressed at the just concluded conference includes the current insecurity that rocks the foundation of Nigeria, Corruption in the public and private sector, Farmers’ herders clash and the ban on open grazing, and the growing agitations for self-governance by various groups.

The NBA SPIDEL also called on the state government to enact laws that will address the high rate of corruption in states while calling on Lawyers to take up careers in public Interest Development.

This year’s conference witnessed massive Participation as Dignitaries from all walks of life graced the occasion.

COMMUNIQUE ISSUED BY THE NIGERIAN BAR ASSOCIATION (NBA) SECTION ON PUBLIC INTEREST AND DEVELOPMENT LAW (SPIDEL) AT THE END OF HER PUBLIC INTEREST ANNUAL CONFERENCE WHICH HELD AT JOGOR CENTRE, IBADAN, OYO STATE ON THE 23RD – 26TH MAY, 2021 ON THE THEME: THE ROLE OF PUBLIC INTEREST IN GOVERNANCE IN NIGERIA

At the Conference, there were lead presentations from eminent speakers, senior members of the Bar, the academic, the political class, critical stakeholders and other renowned jurists.

Speakers at the Conference discussed issues surrounding the imperatives of Public Interest in Governance, internal security as a prerequisite for national development; the Legality and efficacy of Public Inquiry by State Governments; the Role of the Office of the Public Defender; Sustainable Development Goals, Third Party Data Capturing for National Identification Numbers Project, paternity fraud in Nigeria etc.

Following the presentations, the Conference observed the following:

In the light of the observations above, the following resolutions were made:

SPIDEL therefore submits that there is the need for the Federal Government to invest in and institutionalize ranching in the country.

The Conference urges the Federal Government to champion the creation of state police as a way of reducing over-reliance on national security outfits for preservation of lives and property.

–              Establish gender units in police, judiciary and other first responder agencies on the issue of women.

Furthermore, persons who act as third parties in data collection/analysis and usage should be men of high level of integrity who should also pass proper security checks.