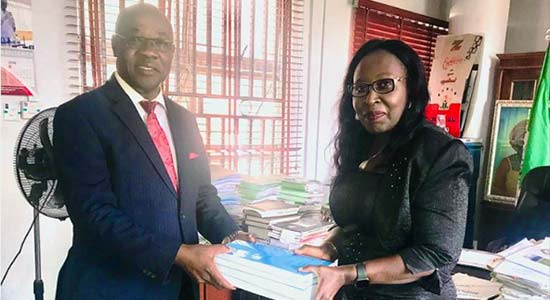 *Reviewed Criminal Law Has 49 Chapters And 460 Sections.
*Chief Judge To Periodically Review Fines
*Incest Defined To Include An Adopted Child
*Defilement Is Made Non-Gender Based Offence

TheNigerialawyer, gathered that Dr Mrs Uju Nwogu, on 11th February 2020, inaugurated Anambra State Criminal Code Law Review Committee and appointed Justice Obiorah, as the chairman.
.
The committee was charged with critically revising the extant Criminal Code Law in the State and proposing a new draft bill for the repeal of the extant law.

Justice Obiora, in his statement, noted that following the obvious dynamic nature of our world, the Committee painstakingly deliberated on every section of the extant law.

He said: “The purpose is to determine whether or not each provision still serves a purpose in our current clime, and if the prescribed punishment is still appropriate in the light of present realities of our times. In the course of the work of the Committee, it became apparent that certain new offences would be created, some offences previously created by single pieces of legislation needed to be harmonized and made part of the Criminal Law, some punishments are inadequate or harsh, the fines have become obsolete and meager.

“Above all, we are living at a time when congestion of the Correctional Centres has defied any meaningful solution.

“The draft has made clear provisions for punishment of certain categories of simple offences and misdemeanours with an option of a non-custodial sentence.

“We believe that this measure will go a long way in decongesting the correctional centres and the community service orders would benefit the society”.

The Reviewed Criminal Law (draft bill) has 49 Chapters and 460 Sections. Some innovative provisions which are worthy of note are highlighted below:

1. The draft bill no longer contains a code. A code law is a legislation that avers it is comprehensive in its coverage of a specific area of law. The reality is that no criminal legislation in our clime can successfully do so. Consequently, the committee resolved to disregard the use of a code.

2. The committee created a schedule of fines to provide for punishments that include an option of a fine. In addition, Section 8 empowered the Chief Judge to periodically review the fines and keep it in tune with economic realities as times may dictate.

6. Ordering forfeiture of a property used for kidnapping purposes – Section 312

7. Defilement is made non-gender based offence and incest now defined to include an adopted child – Section 204 and 221
8. The draft bill introduced the criminal liability of corporate entities in Section 7.

9. A definition was provided for the word “capacity” under the defence of insanity, in order to give it a proper context.

10. Whipping as a form of punishment has been removed in the Law and replaced with non-custodial punishments – Section 75.

11. On accessory after the fact, Section 87 did away with the exclusion of wives as contained in the extant law.

12. The provision on time for commencement of prosecution (Section 87 of the extant law) was removed for being unconstitutional. Section 91 on possession of seditious publications was removed for not being a penal provision. There is also the removal of Section 398 which created a vicarious liability.

13. Section 349 of the draft bill was elaborately expanded to cover the meaning of being armed for the offence of armed robbery. The nature of the offensive weapon used and injury sustained by the victim may have effect on the punishment.

14. Considering its prevalence in the State, a provision was introduced to check sand dredging and dealing.

He further stated that he is confident that this draft Criminal Law, if passed and operative shall be the most comprehensive and innovative criminal legislation in Nigeria and will be a blueprint for other States in Nigeria to follow.

He also commended members of the committee for their assiduities and hard work throughout the review.

“Finally, I want to place on record the hard work, commitment and dedication of members of the Committee. They made invaluable sacrifices to ensure that this assignment was completed which is now a big relief”.