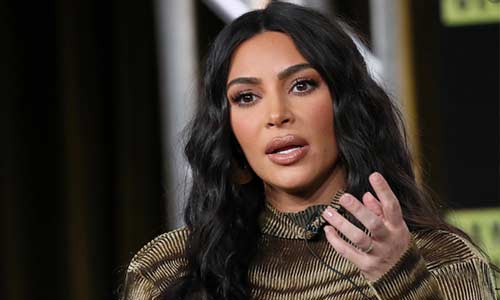 Kim Kardashian may have hit a stumbling block on her path to become a lawyer. A new clip from an upcoming episode of Keeping Up With the Kardashians reveals that Kim failed the “baby bar,” a test would-be lawyers take after a year of study. (Rather than attending a traditional law school program, Kardashian is apprenticing with a Southern California law firm.)

“So you guys, I did not pass the baby bar,” Kardashian tells her sisters in the clip. She explains in a to-camera interview that because she is working independently, her studies will take four years instead of three, and that this test is to some people harder than the “official” bar that would allow her to practice law presumably in California. She needed a score of 560 to pass, but received a 474. She also admits she feels like “a failure” after spending hours and hours studying each day for six weeks.

Kim’s sisters Kourtney and Khloe Kardashian are supportive, saying their dad Robert would be proud of her just for trying, and that she’s definitely worked hard and sacrificed family time.

The “baby bar” or First-Year Law Students’ Examination (FYLSE) is, according to JDAdvising.com, “primarily administered to those who study law at unaccredited law schools (including online law schools). Others who have to take it are those that work through the Law Office Study Program (i.e., those that hope to become lawyers not through law school but through working with a lawyer or judge),” as Kardashian is.

It has to be passed in up to three attempts in order for the test-taker to receive credit for their studies, and it’s offered by the California Bar association twice a year, so Kim can take it again soon if she wants to. The site also mentions that only around 20% of test-takers pass, so she shouldn’t feel too bad about needing a re-do!

But Kourtney reminds her sister how proud their late father would be of Kim going after her dreams while raising four young children. “I feel like dad would be really proud of you regardless, just the fact that you’re pursuing this,” Kourtney says. “I think it’s highly respectable what you’re doing,” Khloe adds. “I think the time that you get taken away from your family, your kids…” Lawyer and political commentator Van Jones recently said how “amazing” KUWTK’s Kim is doing while serving out her apprenticeship at his criminal justice reform non-profit Dream Corps JUSTICE. It looks like the billionaire reality star will just have to wait a little longer before becoming an esquire.