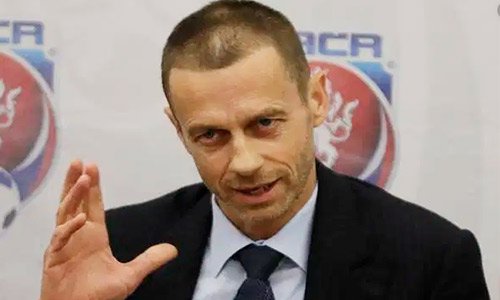 European football’s governing body UEFA will discuss getting rid of the away goals rule in its competitions.

The rule has been in place in European competitions for 56 years, and means that the team who has scored the most goals away from home over a two-legged fixture win the tie should it be level on aggregate after extra time in the second leg.

However, The Times report that the organisation will consider scrapping it when Uefa’s club competitions committee meet on Friday and the process to make the change will begin should there be enough support.

It’s believed that the use of neutral venues for certain fixtures due to the coronavirus pandemic made the rule seem particularly unnecessary, while in general home advantage in two-legged ties is not as great as it once was.

The rule has been a crucial part of European competition and has had a significant impact, leading for calls to scrap it for many years.

During Tottenham’s run to the Champions League final in the 2018/19 season, the away goals rule ensured they progressed past both Manchester City and Ajax, while in the same season Manchester United beat PSG in the last 16 thanks to their three goals in Paris.

This season, Juventus crashed out on away goals after Porto scored in the 115th minute of the second leg to send them on their way to a famous two-legged victory.

Mauricio Pochettino’s PSG side benefitted from the rule to beat Bayern Munich in the quarter-finals, after the tie had finished 3-3 on aggregate.

Arsene Wenger throughout his time as Arsenal manager was an outspoken critic, and once again called for the rule to be binned after the Gunners and Chelsea were both knocked out of the Champions League on away goals in 2015.

Wenger said: ‘Two teams have gone out on away goals, which I think should be questioned because it’s a rule that is outdated now and has to be changed. I’ve fought for that for a long time.

‘It should count maybe after extra time because this [current] rule was created in the sixties to encourage teams to attack away from home. Since then football has changed. The weight of the away goal is too big today.

‘I think maybe you can count [away goals] after extra-time like in the League Cup in England.’

Three years ago, UEFA’s deputy secretary-general Giorgio Marchetti said the organisation would review the situation after many of the game’s top coaches insisted the rule favoured the away side too much.

‘The coaches think that scoring goals away is not as difficult as it was in the past,’ Marchetti said.

‘They think the rule should be reviewed and that’s what we will do.’

While similar discussions will take place this Friday, they will take place without the likes of Manchester United’s Ed Woodward or Manchester City’s Ferran Soriano, who resigned from the committee last month as part of the failed European Super League plans.