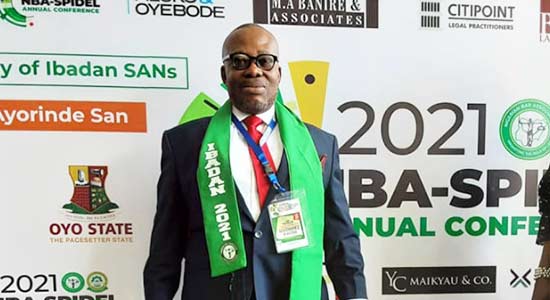 I received the good news with great joy. Congratulations sir. 👍👍👍👏👏👏🙏🙏🙏I am proud of you. Wishing you a successful tenure and hoping your leadership, while improving upon the gains of its predecessors, will refocus SPIDEL towards programs and policies calculated to directly and positively impact on the professional lives of Nigerian lawyers, create more job opportunities for lawyers in public litigation, and improve upon the current slow and agonizingly dilapidated state of system of administration of justice and public advocacy in Nigeria. Amen 🙏.

It’s my humble observation that SPIDEL may never be as useful to society as it ought to, unless SPIDEL starts being useful to lawyers and especially by deliberately exploring new advocacy opportunities towards making lawyers more and directly relevant to society.

The major reason frivolous Litigation proliferates while court congestion worsens is because Nigerian lawyers are grossly underutilized professionally (having very few employment opportunities in a country with many but grossly untapped/unexplored lawyer-employment spaces). Take as an example, the implementation of the directives given in section 66(3) Nigerian Police Force (Establishment) Act (NPFEA), 2020 would immediately yield four major advantages— give jobs to over 10,000 Lawyers with opportunities for much more as time progresses; reduce filing of frivolous criminal cases in courts filing (as the legal department in each police station will scrutinize any investigation report to advise the DPO on which case ought or ought to not be pursued); provide ready professionally qualified public (criminal) prosecutors; and improve human right records of police stations in Nigeria. A second example: installation of legal departments in all local government councils in Nigerian will bring about no fewer than ten immediate advantages, some of which I have highlighted. See : ”TEN IMMEDIATE BENEFITS OF HAVING A LEGAL DEPARTMENT IN EACH LOCAL GOVERNMENT IN NIGERIA & TEN CRITICAL STAKEHOLDERS TO HELP MAKE THIS HAPPEN” by Udems. (Published in TheNigeriaLawyer, barristerNG, LegalDesk, DNLLEGALANDSTYLE, thebarandbenchnews, Newswire, etc). Further, the Ondo State Government has just announced the establishment of legal services departments in all parastatals in the state. A laudable program that SPIDEL and NBA can assist in excalating to other states and the federal government, not just because it would create jobs for Lawyers (although this is key), but especially because it would bring lawyers closer to governance and the people.

The list of how SPIDEL can play direct roles in assisting the Nigerian lawyer and enhancing access and administration of justice, is endless. All you need to do is to start from somewhere; a journey of a thousand miles starts with a step. But three things must be made clear and these should be noted, please:

(1). NBA can’t help other people unless NBA has first helped itself and its members; you cannot manage other people, unless you have effectively managed yourself. If you want to have enough to give to others, you will need to take care of yourself first. A tree that refuses water and sunlight for itself can’t bear fruit for others. Until NBA makes itself relevant and useful to itself and (to a substantial extent) meets reasonable expectations of its members, NBA cannot be of much relevance to society, neither will the NBA ever be taken seriously as a force to be reckoned with. See the vicious, mindless assault perpetrated against the NBA and the Nigerian judiciary in early 2019, with no regard to due process and proper procedure. Politicians and Nigerian power-wielders were encouraged and emboldened by their belief (borne out of experience) that the NBA is a sort of toothless bull dog, with a mouth to bark and never to bite. The various governments and tradional party politicians hardly lose sleep over NBA’s public statements; they see the NBA as a barking dog that never bites. They believe, perhaps rightly, that beyond issuing public statements, NBA does nothing else to either follow up its statements or to hold leaders accountable. Ironically, in the face of brazen violation of rule of law by governments and political leaders, it’s to the NBA and its members that the ordinary man looks for protection.

(2). NBA must start deliberate efforts to improve the lot of the Nigerian lawyer and to elevate and restore him to his lost respect and glory in society. Not an easy task; no task is easy, but nothing ventures, nothing gain; hence, we must take the bull by the horn without fear of failure, without minding anticipated hitches. It’s better to have tried and failed than to never have tried. Alfred Lord Tennyson put it this way, “It’s better to have tried and failed than to live life wondering what would’ve happened if I had tried”. There is only one thing that makes a dream impossible to achieve: the fear of failure. Setting goals is the first step in turning the invisible into the visible. After this, the only limit to the extent and height of your achievements is the reach of your dreams and your willingness to work for them. There will be obstacles, I repeat. Indeed, as has been said, the height of the accomplishment of a man is measured by the size of obstacles the man has had to overcome in order to reach the man’s goals. Muhammad Ali explained further: “Impossible is just a word thrown around by small men who find it easier to live in the world they’ve been given than to explore the power they have to change it. Impossible is not a fact. It’s an opinion. Impossible is a potential. Impossible is temporary. Impossible is nothing.”

(3). To realize these lofty ideals, there is need for constant discussions on the issues Yes, the starting point is to sit down and begin talking about them. In our Conferences, Workshops and Retreats, let’s learn to discuss issues that directly affect the NBA and its members. If we don’t discuss these issues, we won’t able to take informed positions on any. There are countless such issues many of which are of interest to SPIDEL. I have tried to list out just a few. See: “CRITICAL ISSUES NBA SHOULD BE DISCUSSING, BUT IS NOT” (published on <https://thenationonlineng-net.cdn.ampproject.org/v/s/thenationonlineng.net>)

SPIDEL as NBA’s SECTION ON PUBLIC INTEREST AND DEVELOPMENT LAW, should quickly learn to rechannel its conferences and seminars towards improving and expanding public interest and public-benefiting litigation/advocacy, creating opportunities for increased participation of lawyers in public interest litigation and law reform, enhancing access to, and affordability of, accelerated administration of public justice, development law, and law reform, in line with the objectives of SPIDEL and the NBA. All else is mere scratching of the surface that will yield only little or no fruits at the end. Happily, with Monday Ubani, a human rights activist, public interest lawyer, development-oriented advocate, seasoned Litigator, and legal luminary, on the saddle as the SPIDEL Chairman, I think it’s time to get SPIDEL to refocus in order to rebound. I know you have all it takes to succeed and to make history with SPIDEL. The ball is now in your court even as history beckons. Once again, sir, congratulations and best wishes to you.