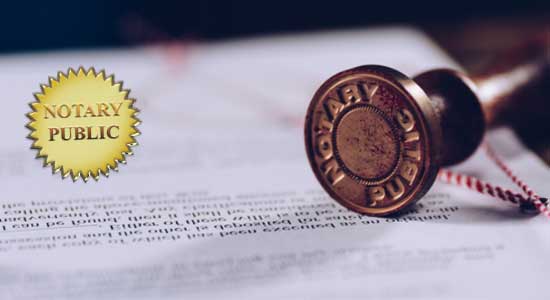 The on-going industrial action by the Judicial Staff Union of Nigeria (JUSUN) has tasked the survival instincts of many a counsel in Nigeria like few things in recent times – both professionally and otherwise. What clearer sign of this than the so-called ‘order’ – which went viral in social media last week – which was purportedly issued by a Notary Public of Nigeria, in which he purported to adjudicate on a commercial dispute between a bank and its customer, something ordinarily reserved for the regular courts. Was he right? Let’s see .

Dated the 26th day of May 2021, it was issued by one Anthony Idanosi Eruaga, Esq., sitting “In the Abuja Judicial Division of the Notary Public of Nigeria” – complete with a legal practitioner’s stamp and the customary ‘red seal’ normally affixed to court processes and agreements. The proceedings leading to the order (titled ‘Reversal Order’) were purportedly instituted by one Deborah Oluwabukola Babatunde against Guaranty Trust Bank Plc., and the ‘cause of action’ is best expressed in the terms of the order itself, to wit: “that the sum of N551,250.00 9Five Hundred and Fifty One Thousand, Two Hundred and Fifty Naira) wrongly/erroneously paid by Deborah Oluwabukola Babatunde – Account No. 2000632834 via Kuda Bank into Account No. 0023457325 with the name: Ofoefu Gabriel Chukwubuikem GTB Account instead of Account No. 0032457325, Name – Arisokwu Charity Amarachi GTB Account be reversed back to Account No. 2000632834 belonging to Deborah Oluwabukola Babatunde”.

Before scrutinizing the competence or otherwise of Mr. Eruaga to issue the order, it is pertinent to pose the question of:

Who is a Notary Public?

According to the Oxford Dictionary of Law, 6th Ed., a notary public is a legal practitioner who attests or certifies deeds and other documents and notes or protests dishonoured bills of exchange. Blacks’ Law Dictionary, 7th ed., adds that a notary public is a public officer whose function is to attest and certify, by his hand and official seal, certain classes of documents, in order to give them credit and authenticity in foreign jurisdictions, to take acknowledgements of deeds and conveyances and certify them, and to perform certain official acts, chiefly in commercial matters, such as the protesting of notes and bills, the noting of foreign drafts, and marine protests in cases of loss or damages.

In Nigeria, only a legal practitioner can become a notary public: Section 2(1) of the Notaries Public Act (“NPA”). They are appointed by the Chief Justice of Nigeria and are deemed to be officers of the Supreme Court. They perform the same duties and exercise the same functions as a notary in England: Section 2(1) (2) of the NPA. They can be removed for misconduct by the Chief Justice on a report from a court which convicts them therefor: Section 7 of the NPA. The CJN can also suspend them pending a reference to and decision by the Supreme Court on any complaint against them: Section 9 of the NPA. By virtue of Section 15 of the NPA, any notary public who wilfully certifies or propounds any false statement or document is liable on conviction, to imprisonment for 2 years.

This is the million naira question and its answer is temptingly obvious: a resounding ‘No’! However, the reasons might not be that easy to proffer. However, here goes. To start with, nothing in the NPA even, remotely empowers notaries to ‘hold court’ and issue orders in the manner in which Mr. Eruaga boldly did: expressio unius est exclusis alterius (the express mention of something in a statute implies the exclusion of others which otherwise might be reasonably included).

Secondly, even if he possessed the legal capacity to conduct what was clearly a judicial proceedings, there was nothing to show – on the face of the order – that it was heard inter partes, i.e., that the respondent, GT Bank, was heard prior to its making. It is an elementary rule of fair hearing (called audi alterem partem) to hear the other side to a dispute before taking a decision which will prejudicially affect that party’s civil rights and obligations. This rule of natural justice is enshrined in Section 36(1) of the 1999 Constitution and has been restated time and time again by the Supreme Court.

Thirdly, under the Constitution (Section 6), the judicial powers of the Federation and the States are vested in the superior courts named therein – as well as any other courts which the National and State Houses of Assembly may deem fit to establish. Needless to say, no law confers adjudicatory functions on notaries public in Nigeria. Some have referred to an English statute which seemingly empowers notaries public in the UK to exercise judicial functions if, for whatever reason, courts there are unable to sit or function. Well, the short answer to that is that our NPA is self-executing, complete and all-embracing in terms of the remit of notaries public in Nigeria. Accordingly, the question of relying on a foreign law does not arise.

The latest on the affair is that Mr. Eruaga has reportedly recanted and has apparently withdrawn the offensive order – blaming its publicity on the affected bank. As if it makes any difference. It is, indeed, too little too late as, his mea culpa is the ‘notarial equivalent’ of medicine after death. Accordingly, the upshot of Mr. Eruaga’s malfeasance is that he was way in over his head when he purportedly issued the order in question, He acted most recklessly and with scant regard for not only Legal Practitioners Rules of Professional Conduct, but the Constitution itself. He lacked the peremptory mandate which he exercised so magisterially and with automatic alacrity – ultimately, in vain, as he is now subject to the disciplinary remit of the Supreme Court twice over: first, under the NPA and, secondly, on appeal from the possible sanction of the Legal Practitioners Disciplinary Committee (LPDC) for infamous conduct in a professional respect.

Whilst the latter is a well-beaten track, the former is not so clear. This is because, contrary to the provisions of Section 232 and 233 of the Constitution, the NPA (in Sections 1, 8 and 10), purports to confer original criminal and appellate jurisdiction on the Supreme Court in respect of misconduct allegedly committed by notaries such as Mr. Eruaga. Once again, not only is this illegitimate, given the notion of constitutional supremacy, the said provisions of the NPA are invalid, null and void to the extent of the inconsistency: Section 1(1) & (3) of the Constitution.

As if all this was not bad enough, Mr. Eruaga is also open to prosecution by the Economic and Financial Crimes Commission, because his conduct arguably constitutes an economic or financial crime, given the subject matter of his noxious order. See Sections 4 and 7 of the EFCC Act. So much for seeking to ‘punch above one’s weight’.

Seldom has the normally inobtrusive provisions of the NPA – and the work of the normally placid, self-effacing notaries public – been thrust into such harsh, public glare and scrutiny. Mr. Eruaga has made the news for all the wrong reasons by exposing the Club of Notaries Public and the legal profession itself to public odium, ridicule and contempt. Quite simply, a notary public has never been, and will never be, a judge or carry out such functions ex officio – simply by virtue of his or her being a notary public. The two are parallel lines, which can never meet – save with a legislative amendment to the NPA. Unfortunately, it had to take a certain Mr. Eruaga to put it beyond doubt.