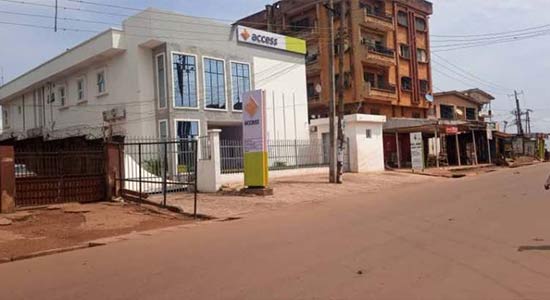 In total compliance to the sit-at-home order issued by the Indigenous People of Biafra, IPOB, economic and social activities in Enugu state have been paralyzed as the State observed the order

Our correspondent who went round the state to monitor and observe the sit at home gathered that the Major Markets, Banks, Parks, Schools in Enugu metropolis were deserted and abandoned.

At Okpara Avenue, Abakaliki Road, New Layout, Ogbete market, Agbani, Abakpa, and other major towns and areas in the state, everywhere looked deserted, as people were not seen moving in pairs while commercial buses and tricycle riders were nowhere to be seen.

“We stand together forever. This is to show that the things that divided us are behind us now. For any ignoring man to close his shop for any cause is a sign of seriousness and determination”, one of the traders who did not want his name in print noted.

Other markets in the metropolis that were affected include Aria market, Kenyatta market, Artisan market, Garki, and Akwata market.

In the same vein, academic activities at public and private schools in the metropolis were affected as no student was seen in schools visited.

A visit to some secondary schools and tertiary institutions in Enugu showed total compliance in the remembrance day celebration. Some of the schools are ESUT School of Medicine, Parkland, Enugu and Enugu State College of Education, Technical, ESCET.

Heavily armed security men were seen stationed at strategic junctions while others soldiers and Mobile policemen were on patrol vehicles moving around the metropolis.

Youths were playing football along Asata mine road and many others in Enugu.