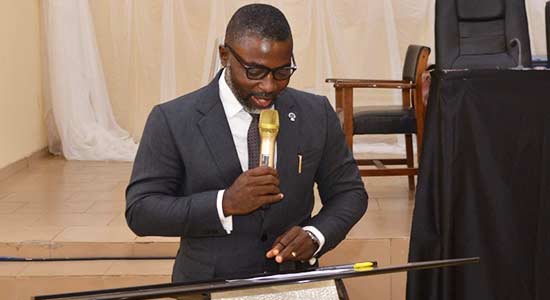 The President of the Institute of Chartered Mediators and Conciliators Dr. Agada Elachi FICMC, FCIArb (UK), delivered the remarks as the chief host of the ICMC Enugu Branch 2021 Annual Lecture.

During the 2021 Annual Lecture and Reception for Newly Inducted Members which held at the Umezulike Auditorium, High Court Complex, Enugu, the President in his speech stated that he considered it an honour and a rare privilege to welcome His Lordship Hon. Justice N.P. Emehelu, the Honourable the Chief Judge of Enugu State, and, His Lordship Hon. Justice George Nnamani, the President of the Customary Court of Appeal, Enugu State, and other distinguished personalities to the auspicious event. He commended ICMC Enugu Branch for continuing to demonstrate its capacity to be a trailblazer.

As part of the recent Innovations in ICMC since assuming the position of the President of the Institute, the President, mentioned the Strategic Action Plan, which was launched on the 29th day of April, 2021. He stated that this plan would guide the affairs of the Institute. Also as part of the mandate to standardize operations and expand the frontiers of the practice of mediation, Committees have been set up to bring this vision to life. One of such committees is the Volunteer Meditator Scheme (VMS). He mentioned that the scheme would provide members especially young mediators opportunity to practice their skills and deploy same for the benefit of the society. He encouraged all members of the Enugu branch to take advantage of the scheme as soon as its operation takes off.

Finally he challenged the new members of the ICMC Enugu Branch to continue to uphold the ideals of the Institute. He charged both old and new members to represent the Institute positively in their practice of mediation; he also encouraged them to apply all the knowledge and skills they have acquired to develop excellent professional relationships, and contribute meaningfully to the peaceful co-existence of various actors in the society and the world at large.

For more information about the Institute of Chartered Mediators and Conciliators (ICMC), please visit www.icmcng.org.