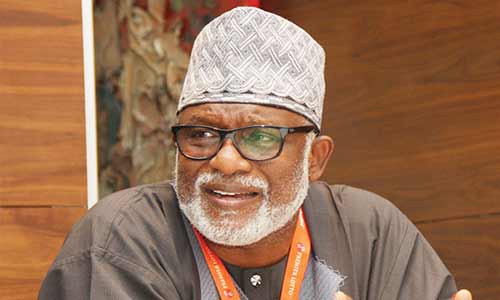 Governor Oluwarotimi Akeredolu of Ondo State, on Tuesday, advocated the scrapping of the Senate with each zones having equal number of four representatives at the National Assembly.

Akeredolu made this disclosure at the Akure Centre of the Southwest Zonal Public Hearing, organised by the House of Representatives Special Committee on Constitution Review.

The governor, represented by his Deputy, Mr Lucky Aiyedatiwa, said that the country should consider dropping the current bicameral structure of the National Assembly, and adopt unicameral legislature.

“The membership of the Assembly should be part time. No member should earn allowances not known to the Revenue Mobilisation and Allocation Committee, and the people they claim to serve.

“Legislators should earn under a uniform salary structure. Allowance peculiarities must not be about obscenity. The Senate should be scrapped.

“The House of Representatives too should not be unwieldy. A maximum of four representatives should come from each Zone,” he said.

Akeredolu said that all issues which elicited distrust and suspicion must be investigated dispassionately.

He said: “Nobody must be shut out; all must be treated equally. All decisions must be anchored on the principles of Equity and Justice.”

The governor noted that constitution review was an important assignment which must be undertaken with all seriousness.

Akeredolu also stated that revenue generation and allocation must reflect the extent to which a state participated in the economy.

“Ministries, departments and agencies must be pruned to reflect the socio-economic realities of the moment.

“The government at the centre must divest itself of this self-inflicted heavy burden, for effective and impactful performance,” he noted.

He later called for state police, resource control, judicial reforms, especially with zones having their court of appeals.

Akeredolu concluded by a return to the 1963 Republican Constitution, saying, “We will have resolved many fundamental issues of nationhood with the adoption.”

Earlier, the Chairman of the Southwest Zonal Public Hearing, Akure Centre, Mr Peter Akpatason, said the event was important to have input of the people.

Akpatason, who is a deputy Leader in the house, said the constitution was made for the people and could not be done without adequate input from the society.

The traditional ruler noted that the problem and challenges facing the country originated from the 1999 constitution.