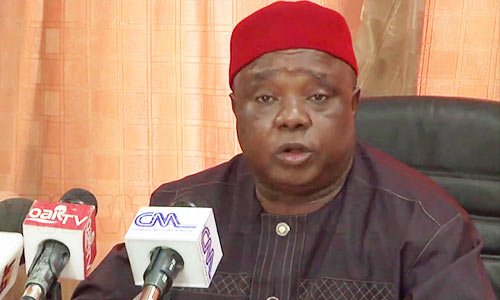 The Revenue Mobilisation Allocation and Fiscal Commission (RMAFC) yesterday said a total sum of N1.54 trillion was collected by revenue generating agencies into the federation account in the first quarter of the year (Q1 2021).

Chairman of the commission, Mr. Elias Mbam disclosed this yesterday while receiving a revenue performance report from the Post- Mortem Sub-Committee of the Federal Account Allocation Committee (FAAC).

The report further showed that the Federal Inland Revenue Service (FIRS) generated N759.86 billion, representing the highest remittance for the period under review.

It added that the Ministry of Mines and Steel Development (MMSD) surpassed its target for the quarter with over N891.28 million.

Mbam further disclosed that over N496. 39 billion was remitted into the federation account as value added tax (VAT) for Q1, surpassing the targeted tax revenue by over N36.80 million, representing an increase of 108.01 per cent for the period.

Further breakdown of contributions by revenue agencies to the federation account showed that the Nigerian National Petroleum Corporation (NNPC) accounted for N47.53 billion, while the Department of Petroleum Resources (DPR) generated N452.51 billion in Q1.

On recoveries, the RMAFC boss also stated that sum of N260.13 billion was received as arrears payments for the period, adding that N845.12 billion was recovered by the sub- committee for 2020.

In a statement issued by Public Relations Officer (PRO), RMAFC, Mr. Nwachukwu Christian, Mbam reiterated the commitment of the commission to increasing revenue generation into the federation account as well as equitable distribution of the accrued revenues to the three tiers of government.

In December, Mbam, had sought the cooperation of revenue regulatory agencies in the commission’s current drive to recover outstanding balances into the federation account.

Earlier in September, the commission announced plans to launch a nationwide verification and reconciliation exercise on revenue inflows and remittances from organisations to the appropriate government treasury.

However, a meeting with heads of the revenue regulatory agencies, he said it was important for the commission to acquaint the various agencies with its mandate and activities and to seek collaboration, particularly in its ongoing recovery efforts.

He said it is the responsibility of the commission to monitor all the accruals of revenue to and from the federation account while blocking leakages.

Mbam explained that in order to achieve the goal, the commission has engaged the services of consultants as well as collaborated with the Economic and Financial Crimes Commission (EFCC).

He stated that while inaugurating the new members of the commission in 2019, President Muhammadu Buhari had charged them to use all legal ways and means to strengthen its monitoring mechanism and block all leakages of revenues to the federation account.

He said in pursuit of this and to ensure optimal results, the commission deemed it necessary to collaborate with all the regulatory agencies of revenue collecting agencies.