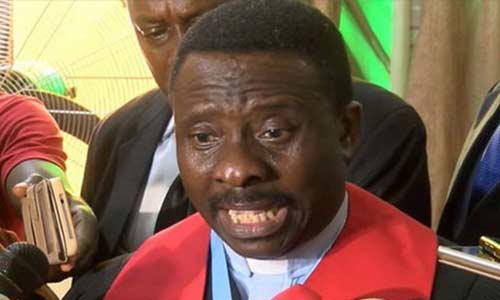 THE President of the Christian Association of Nigeria (CAN), Reverend Supo Ayokunle, on Tuesday, said some members of the National Assembly demanded a bribe from him before the controversial Companies and Allied Matters Act (CAMA) bill can be amended.

Ayokunle made this disclosure in Ibadan during the handover ceremony to new leaders of the Nigerian Baptist Convention, Reverend Dr Israel Akanji and Professor Adewale Akinsola at Baptist Convention Building Chapel, Dugbe, Ibadan.

The CAN chairman, who is the immediate past president of the convention tasked his successors to depend on God for the realisation of any objectives and mission regarding the Christianity and Baptist convention activities.

Recalling what he went through while looking for a sponsor for the amendment to the CAMA bill, Ayokunle said “the arm of flesh is going to fail you. Politicians in Nigeria, when they want to have their way, they know how to lobby. When we went to lawmakers who are Christians in the National Assembly to assist us in sponsoring a bill for amendment to CAMA, I set up a committee to meet them.

“They said if you want us to help, you have to lobby and what does lobby mean. They said Christians only cannot give us what we wanted; that they have to go to non-Christians and before they can support us, there must be an ‘answer’ in your hands.”

Commenting on the proposed introduction of Sharia Law in the South-West zone of the country, the new president of the convention, Revd. Akanji said it was improper and illegal to impose Shariah Law on the people.

He stated: “We don’t all believe in Sharia and Christians should be allowed to operate as Christians. In our Christian schools, we have our enabling law. You can’t come to our schools and say you want this done. There are Islamic schools, a Christian can’t go there and call the shots, saying we want this or that. We can’t do that.