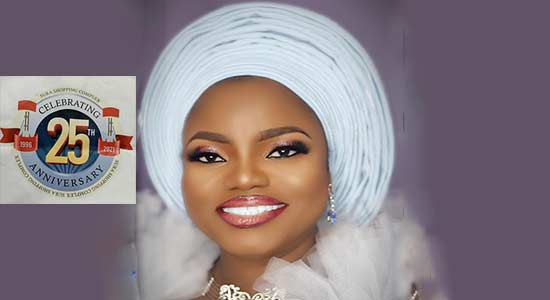 Unveiling the four-day programme of activities to mark the 25 years anniversary of the complex, Chairperson of the association, Bar. Taiwo Oreagba, noted that the projects were done by the association to ensure maximum comfort for all stakeholders within the complex.

“The anniversary celebrations will kick off on Tuesday, June 1, 2021 with a Christian Service at the complex,” said Bar. Oreagba. “This will be followed by raffle draw ticket sales, exhibition sales, trade fair and health screening.”

On Wednesday, there will be a 30-minute Health Walk from Sura Complex to Sandgrouse. This will be followed by Health/SME talks. Sale of raffle draws, health screening and trade fair will continue.

According to Bar. Oreagba, “The anniversary will climax on Thursday, June 4, 2021 with the commissioning of a water treatment plant within the shopping complex by the Executive Governor of Lagos State, His Excellency, Governor Babajide Sanwo-Olu. This will be followed by the unveiling of street names.

“Aside from cultural displays, there will be courtesy visits to dignitaries and launch of SURA DIRECTORY/YELLOW PAGES amid recitation of the history of Sura Shopping Complex.”

Curtains will be drawn on the anniversary celebrations on Friday, June 4, 2021 with a Closing Service (Jumat), entertainment of stakeholders, Musical Concert and Raffle Draw Final. The events will hold at 10 am daily. 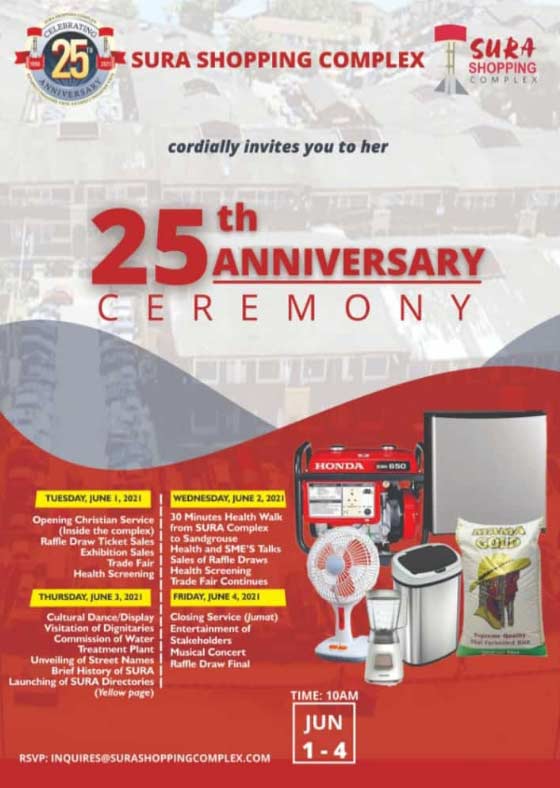 Meanwhile, Bar. Funmi Adeogun has felicitated with the association on its anniversary, saying: “I congratulate the association under the able leadership of Bar. Taiwo Oreagba for this great milestone. I wish all the stakeholders more successes in the years ahead.”

Sura Shopping Complex has been tagged differently by observers as “WASTE to WEALTH” and “GRASS to GRACE” while many refer to it as the “rejected Stone turned Corner Stone.” The complex has been able to fulfill the aims and aspirations of its founding fathers after 25 years of its existence as a Corporate Centre of Excellence.

The complex now boasts of 24 hours of power supply. It generates, transmits and distributes its power outside the national grid, a dividend of the robust partnership and goal focused team of Sura Management and Independent Power Project. This milestone led to a recognition and approval of the initiative by the Federal Government.