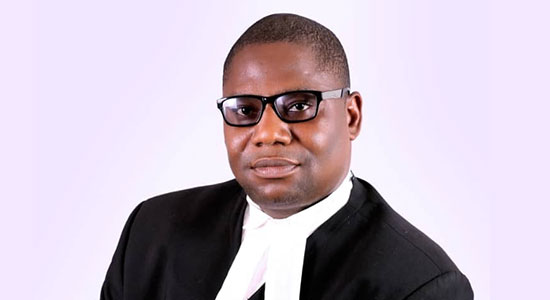 *Says Ezeife Should Face The Truth

The immediate Past Vice-Chairman NBA Anaocha Branch, former member of PDP National Screening Committee and Founder Mmirioma Foundation, Dr. Destiny Chuwudi Nnagbo, has said that governorship on the platform of the Peoples Democratic Party should be zoned to the party’s candidate in the South Senatorial District of the state.

Dr. Nnagbo, made this disclosure Tuesday, in an interview with TheNigerialawyer. Nnagbo while disagreeing with Ezeife, said the zoning should go to the Anambra south and the immediate past governor of the state, Peter Obi, should do the needful.

He said: “I destiny Chwkwudi Nnagbo is a full member of PDP and I am a lover of PDP and in PDP I will stay until we make things right.

“We must do our best as members and on that note, I am an interested person with what’s going on in PDP Anambra state as of today.

Nnagbo stated that the former governor of the state His Excellency, Peter Obi, being a stakeholder in the party should rise up to the occasion and to resolve the issue. He also said going by his pedigree and antecedent that if given the opportunity and supports, Obi will re-position the country and take it to a greater height.

“What I am saying in effect is that what is going on in PDP Anambra state, is very unfortunate.

“I love Peter Obi and I believe he is in the helm of affairs of Anambra PDP, as a man that knows it all, as a man that believes so much in fairness, a man that people love so much because of his antecedent. I am one of the people that can stand for him any day any time because I’ve worked with him as Anambra State waste management Authority (ASWAMA)’s litigation officer for almost 4yrs.

“Obi is expected to learn his voice and to intervene on this issue as the election which is few months away is slated to hold in November, and I wonder what efforts he is making on this vital issue.

“However, I am not saying everybody do not have right to contest. We have procedures on how things are being done in the party. Let there be zoning in Anambra PDP. Let PDP come out to zone the governorship ticket. If it is to go to south, let it be zoned to the people. If is for central let it be zoned there, vice versa.

“Peter obi has to stand firmly on this issue because all eyes are on him. We are all watching him, we the future generation.

“We cannot be talking about the North zoning presidency to the South East and down here, we can’t do it.

“We are looking up to Peter Obi on this matter. He should be encouraged to do the needful.

“Enugu state believes so much in zoning and we stand by it. So why will it be different in Anambra State, why will one person be an issue? To me it is not fair at all. No candidate is 100% sure of Victory in any election. What party owns its members is to do the right thing and leave the rest to God.

He queried on what ground does Chief Ezeife have to say that everyone is eligible to contest irrespective of the district.

“I’ve seen a communique signed by the 12 aspirants wherein one of our great boss Ezeife made a contrary statement to that effect, stating clearly that everyone is eligible to contest irrespective of the senatorial district in the State.

“To me, on what ground is he saying that. Maybe he has a particular candidate in mind that’s why he jettisons the overall interest of the majority and or other candidates.

“When can we start doing the right thing in this country, irrespective of who is involved.

“We look up to him, His Excellency Ezeife to stand and face the truth, no matter whichever love he claims he has for anyone, Nnagbo added.