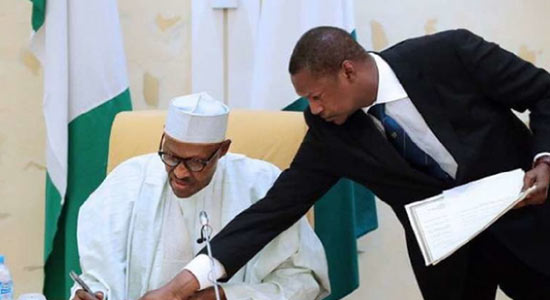 President Muhammadu Buhari is in the process of declaring a state of emergency across the Federal Republic of Nigeria, Peoples Gazette can report based on a secret memo and official accounts, as the administration scrambles to waggle its way out of acute insecurity and the encumbrances of constitutional provisions, According to gazettengr report

Attorney-General Abubakar Malami has already written lengthy legal advice to the Nigerian president, urging him to move swiftly to suspend the fundamental rights of all Nigerians as guaranteed under Chapter IV of the Constitution.

In the eight-page secret memo dated May 4, 2021, Mr Malami told Mr Buhari that insecurity across Nigeria has reached a level that could no longer be checked by existing democratic techniques, saying only a state of emergency promulgated by the president can help return the country to tranquillity.

“The essence of declaration is to allow for suspension of constitutional and legal bureaucratic bottlenecks pertaining to matters of National Security with particular regards to fundamental rights guaranteed under Chapter IV of the 1999 Constitution and processes and procedures relating to procurements, among others,” the attorney-general said.

Mr Malami said the president should issue instruments of emergency and publish them in the federal gazette. Senate President Ahmed Lawan and Speaker Femi Gbajabiamila will be informed about the decision ahead of implementation, he added.

“To douse probable legal tension, it is important for the proclamation instrument of the statement of emergency to expressly provide for the suspension of Chapter IV of the 1999 Constitution and its attendant enforcement rules,” Mr Malami wrote. “The suspension of rights pertaining to matters of national security will then give legal backing for the proclamation of the statement of emergency to be operational and effective without litigious or judicial distractions.”

In the early pages of the document, Mr Malami cited widespread acts of insecurity and blamed prominent separatist agitators like Sunday Igboho and Nnamdi Kanu for fueling the protracted crisis that has enveloped the country and aggravated the social and economic conditions of Nigerians.

The memo was endorsed to the president by National Security Adviser Babagana Monguno and administration officials are divided on how to proceed with the advice. 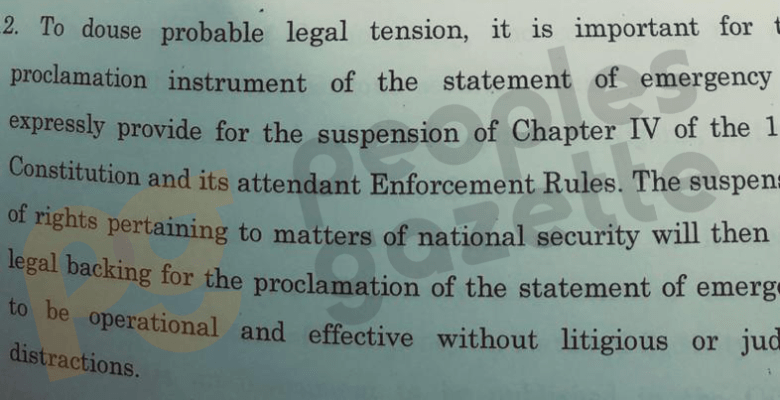 “Clearly, different factions of our government have different positions on this alarming proposal,” a presidency official told The Gazette. “But everyone agrees that the AGF holds powerful sway over the president and it would be a miracle if the Constitution is not suspended as he recommended.”

Another official also within the presidency, who confirmed hearing about the memo but had not seen it before they were reached by The Gazette, said Mr Buhari might have little resistance considering the potency of Mr Malami’s argument.

“The president is just saying they should act in the best interest of the country,” the official said. “Even as the president, he seemed to have given up on his own ability to get the AGF to back down.”

Multiple constitutional scholars and practitioners who analysed the memo for The Gazette said it was essentially a suspension of the Nigerian Constitution and declaration of martial law since Chapter IV dealt with fundamental human rights absence of which there cannot be a democratic system.

The analysts acknowledged the powers of the president to issue a state of emergency under Section 305 of the Constitution but said the powers are not absolute and do not include outright suspension of Chapter IV. While Section 305 said the president can declare a national emergency to curb criminalities, it did not expressly permit suspension of Chapter IV, which analysts described as the most important section of the Constitution.

The right to life and other crucial rights of modern society will be suspended under Mr Malami’s proposal.

The attorney-general appeared to lay the groundwork for the controversial plan when he decried on Tuesday that Mr Buhari’s respect for human rights was largely responsible for the administration’s seeming incompetence at tackling widespread carnage and lawlessness.

Mr Malami and presidential spokesman Garba Shehu did not return The Gazette’s requests for comments about the proposal.

Mr Buhari has been conflicted over widespread chaos that threatens to define his eight-year leadership as a democratically-elected leader. His administration is the fourth since Nigeria returned to democracy in 1999 following years of military dictatorship.

Whereas he touted his military bona fides as a plus for his fitness for a nation beset by insecurity, the country has seen no changes in security challenges under Mr Buhari. Since 2015, thousands of Nigerians have been killed by armed bandits, killer herdsmen, kidnappers and even security agents. Millions of citizens are already racked by economic hardships which analysts blamed on the administration’s rudderless policies.

In his argument, Mr Malami alerted the president to the dangers of allowing the situation to go on unchecked, saying it would wreak even more devastating chaos compared to the current level of disorder.

But the prevailing state of security in Nigeria can be addressed under the existing constitutional framework, legal analyst Abdul Mahmud told The Gazette on Wednesday evening.

“The AGF’s position is nonsensical,” Mr Mahmud said. “They have their own sinister agenda and are trying to come under suspension of the Constitution to actualise it.”

Mr Mahmud said he was incensed by Mr Malami’s suggestion to the president, saying it was unbefitting of his position as attorney-general

“If the attorney-general who ought to be the chief protector of our Constitution is suggesting the need to suspend Chapter IV of the Constitution, then it is clearly an attempt to plunge the country into further crisis,” he said.