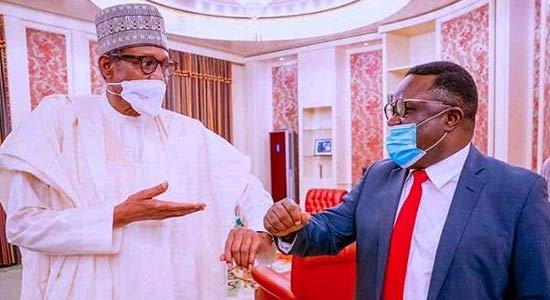 *As Yahaya Bello kicks against zoning

Cross River State Governor, Prof Ben Ayade, has met with President Muhammadu Buhari at the presidential villa, Abuja for the first time since joining the All Progressive Congress (APC), telling correspondents afterwards that he still respects the Peoples Democratic Party (PDP) for what it did for him.

This is as his Kogi State counterpart, Yahaya Bello, who also met with the president, raised his objection to the idea of zoning the 2023 presidency.

Fielding questions after the meeting, Ayade emphasized that he left the PDP for the sake of President Buhari, conceding however that the main opposition party made him what he is.

He said: “I am one of the strong Nigerian Governor who has risen beyond party lines and ethnic lines by virtue of my education and exposure. My choice to join APC is generating a lot of concern for the PDP occasioned by the fact that it came as a rude shock.

“So, in terms of performance of PDP, it should be highest performance in the last election in Cross River, which means of all the elected offices, except for one office, PDP cleared all.

“So, for such a governor who led PDP to such a victory, to defect to APC, definitely, it must come as a very, very rude shock.

“And so at all times, I have chosen to focus on APC and my dreams and reasons for my movement to APC.”

Ayade rationalized his defection to the APC, taking exception to the habit of the opposition to celebrate every negative occurrence in government.

He added: “I moved into the APC because of my personal relationship with Mr President. I have watched him and I find honesty, integrity and I see his wish and commitment to the Federal Republic of Nigeria. To that extent, I have a leader that I trust.

“Opposition in the third world means let everything happen that will made the other party look bad.

“The increasing insecurity in Nigeria as Nigeria suffers attacks from extraneous aggressors paid militia and bandits, the opposition party only celebrates that because they believe it gives them a chance to win in 2023.

“The country is snowballing into civil strife. We need to come together and support Mr President to overcome the insurgency which is characterized by external militias who are paid for the purpose.”

Also speaking to correspondents after his separate meeting with the president, Governor Bello dismissed calls for the rotational presidency, saying it has outlived its usefulness.

Bello who is thought to be warming up to contest the presidential election stressed the need for competence and capacity to be the yardstick for selecting presidential candidates rather than ethnicity or region.

“Why don’t we simply go for the best? After all, we copied this democracy from America and some of the developed world. How many of these countries are practising traditional presidency?

“You see, we are where we are today not because we are practising rotational presidency.

“If you want to go by that rotational presidency, then do perfect zoning. Go by perfect rotation. And if you go by rotation and whichever way you come from, I don’t think you should exclude where I come from. That’s number one.

“Number two, let us get a credible, sincere, patriotic, Nigerian to fix it. If you’re flying an aircraft, you don’t ask who is the pilot? If you take the operation in a hospital, you wouldn’t ask which doctor is this, is he from your zone, your tribe, your religion? All you want is the best pilot to fly you safely to your destination. All you want is you want the best doctor to handle you and deliver you safely from the operation.

“I think Nigeria is at that point now of seeking the best from anywhere in this country, irrespective of where he comes from. Thereafter, you balance, you remain in a position to reflect equity, fairness and justice. That is my position.”

When asked how he would convince the south-east who are agitating for the chance to produce the next president to support him, the Kogi governor said: “As I said, when the time comes, and when God give us the grace, and we’ll get there by the grace of God.

“Surely, I am an advocate of who can serve this country, the best. Currently, in my administration in Kogi state, I have a south easterner serving my state, specifically my DG research and development who doubles as my speechwriter, Barrister Moses Okezie, from Anambra state serving in the States.

“Our green passport should be number one, should be respected across the world, who is going to enhance that?

“We have demonstrated that in Kogi state, where we united ourselves any Kogi citizen anywhere in the country today is proud to be a citizen of Kogi state.

“Anywhere a citizen of Kogi state is today, we are proud and hold your head high, that you are from Kogi state. That is what we should duplicate across the country, and not where you come from.