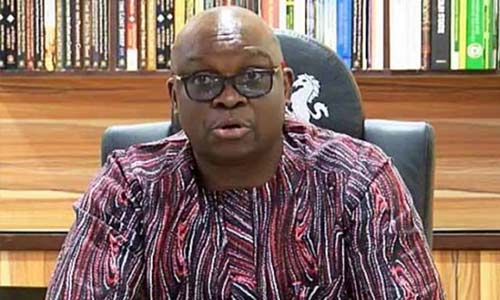 *Mocks Buhari Over ‘Treat Them In The Language They Understand’ Tweet

Former Ekiti Governor Ayodele Fayose has mocked President Muhammadu Buhari over his ‘treat them in the language they understand’ tweet, which has now been deleted by Twitter.

Buhari in the now-deleted tweet said: “Those of us in the fields for 30 months, who went through the war, will treat them in the language they understand.”

Buhari’s threat was in reaction to the security reports he received from Southeast – where secessionist agitations have been heightened in past few months.

TheNigeriaLawyer reports many Nigerians had tackled Buhari over the statement, citing his reference to the civil war as a threat to commit human rights violations.

Fayose, while reacting to the now-deleted tweet, alleged Buhari threatened genocide amid the rising tension across the country.

He said: “A President who cannot address his own people in time of crisis can certainly not be the one tweeting on the crisis.

“It is obvious that those using the President’s powers for him do not know when and where to stop their power-madness.

“Regrettably, Twitter may not know that Buhari is not the one operating the handle. Can our President operate Android Phone not to talk of making genocidal tweets?

“Nigeria is boiling everywhere and all that the President can do is to be threatening genocide up and down?

“When is Mr President Buhari using his power as Commander-in-chief to “show Twitter pepper” for deleting his tweets? Or Twitter will just delete our President’s tweets just like that and there won’t be consequences?”