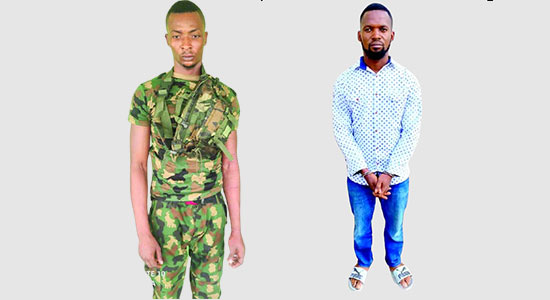 Three dismissed soldiers who took part in training 4000 members of the Eastern Security Network, ESN, the armed wing of the Indigenous People of Biafra, POB, have revealed how they were lured with money and promises, According to Vanguard report.

Vanguard gathered that the dismissed soldiers who were arrested by operatives of the Force Intelligence Response Team, IRT were identified as Linus Owalo, Godswill Steven and Chinasa Orji.

They were arrested recently after operatives of the IRT acted on intelligence they generated from some members of IPOB when they raided the group’s hideouts in Imo, Anambra, Delta and the Federal Capital Territory, FCT, Abuja.

During their confessions, the suspects said they were promised to be sent abroad for further military training and that when State of Biafra was achieved, they would become military generals in the republic. They added that when they discovered that Kanu’s promises were all lies, they decided to quit.

In his confession, 32-year-old Linus Owalo, a native of Layal Local Government Area of Cross Rivers State, who is married with two children, said; “I was enlisted into the Nigeria Army in 2013 and posted to the Guards Brigade Headquarters, FCT Abuja. But in 2019, I was absent from duty and the army authorities arrested me.

I was charged and subsequently dismissed from the service. Since then I have been seeking reinstatement and life has not been easy for me and my family. Then I approached one man for a job who however linked me to one Mr Williams who could help me get a job. Mr Williams told me about Biafra and their dream to achieve a sovereign state. He invited me to their meeting where they welcomed me warmly and I was given a half bag of garri, five tubers of yam and they also paid a visit to my wife and children.

I then told them that I was making plans to get reinstated into the Nigeria Army but they told me that I should forget about it that their Supreme leader, Nnamdi Kanu, would make life better for me if I could train the IPOB militias known as ESN.

They also told me that I would be sent abroad for more military training after I must have trained the militias and that when Birafra was actualized I would become a general in the Biafra Army. I took an oath of allegiance to Nnamdi Kanu and also vowed that I would die if I betrayed the Biafra struggle. I was then given the sum of N100,000 before moving to a forest in Abia State, where I met over 4000 men who wanted to be trained.

This was in October 2020. I also met some other dismissed soldiers of the Nigeria Army who were there to train the men.

We commenced training the moment I arrived and we started with push-ups, moral training, then moved to fire movement known as field craft. The people managing the camp refused to trust us and they didn’t involve us in their meetings.

Three months into the training, they sent us to Delta State, where we met a man known as Be-in-Spirit who took us to the camp. They told us that when we got to Delta they would take care of us very well but when we got there we discovered that the camp had been shut down. I couldn’t talk to Nnamdi Kanu, I was just talking to his boys. I discovered that I had been brainwashed and used by IPOB”.

The other suspect, Godswill Steven, a 33-year-old native of Bende Local Government Area of Abia State, in his confession said; “I joined the Nigeria Army in June 2017 and I was attached to the Special Force and I had my four months training in Kontagora. I also went to Kaba, Kogi State for another three months training, before I was sent to Takum in Taraba State for three more months training.

At the completion of my training I was sent to 133 Battalion, where I sustained an injury. I was posted to Maiduguri in 2018 and I fought at Garuda in Maiduguri, I survived the battle even with my injuries. I wanted to treat myself but the army authorities refused to allow me go for treatment.

When the pain became too much, I left to treat myself and when I returned, I was arrested and locked up in a cell where I met Chinasa Orji. We became friends and while in the cell he told me that one of his friends called him from Senegal and informed him that Nnamdi Kanu was recruiting soldiers to train IPOB militias.

He said Nnamdi Kanu was ready to pay them twice the money they were earning as soldiers. He also told me that Nnamdi Kanu would take the soldiers abroad and when Biafra was achieved he would make them generals in the Biafra. I accepted the offer and they paid us N100,000 each which was twice the salary I was receiving from the Nigeria Army. We then traveled to Abia State where we took oaths to be loyal to Nnamdi Kanu.

We were also taken into the camp where we gave the militias trainings on combat and special forces maneuvering. After spending one month in the Abia State Camp, we were transferred to another camp, where I spent three weeks training the militias I met there. I left the camp, when it became clear that the promise they made to take us abroad for training wasn’t realistic. I came down to Abuja where I got a security job before I was eventually arrested”, he stated.

The third suspect, Chinasa Orji, a native of Isikuator Local Government Area, aged 23, said: “I was enlisted into the Nigeria Army in 2015 but was dismissed in 2018 after I attended the burial of my elder brother, a soldier who was killed on 22 August 2018. My elder brother was a soldier who was killed when he went on escort duty in Bayelsa State. My bosses refused to give me a pass to attend the burial but I went on my own while my bank account was frozen.

When I returned, I was arrested and detained. While in detention I had access to my phone and I started chatting with one of my friends known as Victor who told me that Mazi Nnamdi Kanu needed my service to train some IPOB militias. He told me that Kanu was ready to pay me twice the money I was earning in the army and I told my friend Steven, who was also in detention, about it and he accepted.

They sent us money which we used to travel from Yola, Adamawa State to Abia State and we were picked up by some IPOB members and taken into the forest where we took oaths and started training the militias.

I was paid N100,000 but I got angry when they couldn’t fulfill their promise of taking us abroad for training.