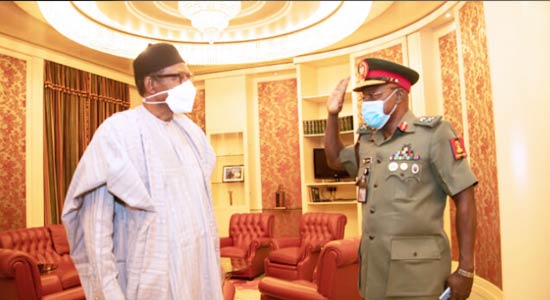 President Muhammadu Buhari has emphasised the need for synergy among the three services of the armed forces in the country, for the ongoing war on insecurity to be won.

Buhari made the emphasis on Monday when he received the new Chief of Army Staff, Major Farouk Yahaya, who was in the Presidential Villa with the Minister of Defense, Major-General Bashir Magashi (rtd.), on an introduction visit.

Relating part of the conversation between the President and the new Chief of Army Staff in an interview with NTA after the meeting, Magashi said President Buhari also learnt new tips on how to win the protracted war on insecurity in the country.

According to him, President Buhari made sure he pointed out to Yahaya that the nation’s security has been under serious pressure, but he (Magashi), on his part assured Nigerians that a lot is about to change with security operations in the country.

“He told him that there’s a lot of pressure on security and being an actor, at one point or the other has given us a direction in which we can learn from his experiences and apply them to our modern operations and I think we have taken the advice seriously.

“The issue of synergy among the security forces was also stressed and I’m sure there will be a lot of changes as regards to the security operations in this country.

“The President received us, offered some advice on how we can go about doing this operation and the entire security of the country. We assured him that we will do our best to bring an end to the problem of insecurity in this country.

“He’s very happy; he thanked Mr. President for giving him the opportunity to serve as the Chief of Army Staff and promised that he will bring all his experiences to bear in collaboration with his colleagues; Chief of Air Staff, the Chief of Naval Staff, to be able to do this country proud.

“The President really has confidence in the new set of people that he has appointed. We wish them the best of luck,” Magahsi said.

Asked about what the armed forces are doing to restore peace to the Northwest region, Magashi pointed out that the armed forces have just been rendering a supporting role to the police, which is constitutionally saddled with the responsibility of keeping civil peace.

He said the main concern of the forces is the terror activities mutating in the Northeast, categorically noting the growing concern with the activities of the Islamic State West African Province (ISWAP).

“In the Northwestern part of the country, you know that the more concern we have is the insecurity of banditry, kidnapping, and other criminalities. We are taking the challenge, but you know, really, this is the constitutional responsibility of the police, we are only an aid to the police and we are giving maximum cooperation to the police in order to see an end to this banditry and insecurity in the Northwest, otherwise, I think it’s quite different from the Northeast.