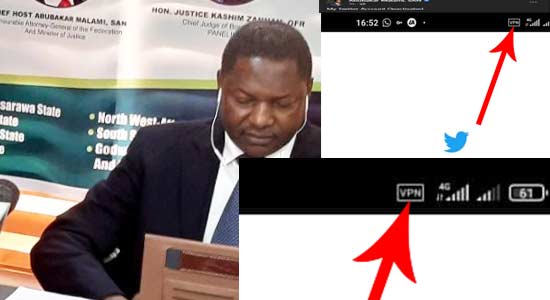 The Attorney-General of the Federation, Abubakar Malami (SAN), on Tuesday logged into Twitter and deactivated his account using Virtual Private Networks (VPN), a screenshot posted by the minister has shown.

Malami had on Saturday threatened to prosecute Nigerians who were still using VPN to access the micro blogging platform.

Recall that Attorney-General of the Federation and Minister of Justice, Abubakar Malami, SAN, deactivated his Twitter.

He also shared a screenshot of the deactivation notice.

VPN is a connection that allows users to establish a protected network connection when using public networks.

A clear look at the photo showed that VPN was active on the phone the AGF used for the screenshot.

Recall that the Federal Government suspended, indefinitely, the operations of Twitter, the microblogging and social networking service, in Nigeria.

This is disclosed by the Minister of Information and Culture, Alhaji Lai Mohammed, via a statement issued by the Ministry’s spokesperson, Segun Adeyemi.

The Minister cited the persistent use of the platform for activities that are capable of undermining Nigeria’s corporate existence.

“The Federal Government has also directed the NBC to immediately begin the process of licensing all Over-The-Top (OTT) and social media operations in Nigeria,” the statement read.

Also, “Attorney general of the federation and minister of justice, Abubakar Malami, has directed for immediate prosecution of offenders of the federal government ban on Twitter operations in Nigeria,” a spokesperson, Umar Jibrilu Gwandu, said.