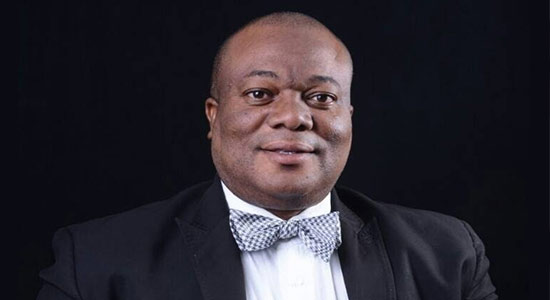 Yamah, made this statement on Tuesday, following the banning of Twitter use in Nigeria.

TheNigerialawyer earlier reported that Buhari blocked Twitter after the social media site deleted a tweet he made that threatened secessionist groups in the southeast who had been responsible for attacks on government offices.

The government suspended Twitter, which is used by millions of Nigerians, on Friday night, after a government official called the microblogging platform’s presence in Nigeria “very, very suspect.”

The minister of information, Lai Mohammed, posted the announcement of Twitter’s suspension — on Twitter.

He said: “When Twitter came to Africa, they settled for Ghana and Nigerians protested on the ground that we have the largest numbers of Twitter users in Africa. Locating the ‘Twitter Africa’ office in Ghana with a lesser population is a slight on Nigeria.

For us in Nigeria, numbers should have been the determining factor in deciding, which country Twitter should cite its Africa office.

“I tried to rationalize the back and forth argument with my secondary school knowledge of economics and commerce. In locating an industry, several factors have to be taken into consideration and Twitter has this knowledge.

They choose Ghana with better security, power, and adherence to the RULE OF LAW.

“To them, numbers, though important but is secondary.

Today, Twitter is barred in Nigeria by the Nigerian government. In Nigeria, we have executives at state and federal levels who can’t tolerate divergent views and have shown scant regards to the rule of law, which are entrenched principles of democracy.

“If the Presidency felt that twitter treated the President unfairly by deleting his account, the option was to go to court to challenge twitter’s action. For every wrong, there is a remedy. This is in accord with the rule of law in any civilised society. The Nigerian government chooses not to explore this civil option but resorted to the use of force to assert Nigerians sovereignty and thereby violating her own municipal laws.

“Maybe the President would have gone to court, just maybe but our courts are shut down and the executives at federal and state levels are not disturbed.

“They carry on as if nothing has happened.  They seem to be celebrating the closedown of the courts.

“The Governor of Oyo State at the NBA Spidel Conference held last week at Ibadan, actually stated that he was excusing himself from the conference to attend to the swearing-in ceremony of the newly elected local government council executives elected two days earlier and that no court to grant an order of injunction to stop the swearing-in ceremony. Everyone in the hall, particularly lawyers laughed over it. It was a beautiful joke by the way.

“Nigeria must rise up to our daunting challenges to explore our economic and human resources.

“WE CAN BE A GREATER NATION IF…,” he stated.