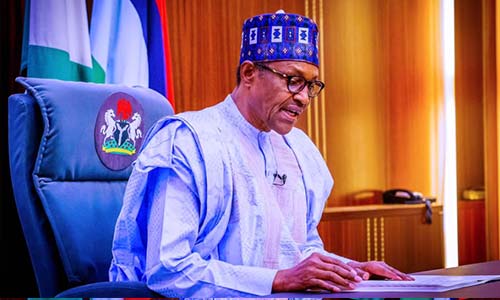 President Muhammadu Buhari has explained the decision of his government to construct railway to Niger Republic.

The President stated this Thursday in an Exclusive Interview on ‘Good Morning Show’ on ARISE TV.

He said he had first cousins in Niger, while also adding that Fulani, Hausa and Kanuri are in the neighbouring country and cannot be cut off.

The President further explained that the railway being constructed would also boost the friendly relationship with Niger which had helped Nigeria in the fight against Boko Haram insurgents.

He stated: “If you recall, when I came, I went to Chad, I went to Niger, I went to Cameroon. Look at what happened with Boko Haram. If we were not in a good relationship with Niger, Chad and Cameroon, Boko Haram would have done worse things to us and you say I am going to Niger.

“I told you the border between us and Niger is 1, 500km. I spoke to one French man and I had to tell him this. He spoke nonsense and I told him look, in 1885, you sat down and drew lines (boundaries). I said I have first cousins in Niger. There are Kanuris, there are Hausas, there are Fulanis in Niger Republic just as there are Yorubas in Benin. You can’t absolutely cut them off.”

Buhari stressed that Niger, which is a landlocked nation, had discovered oil, and Nigeria did not want them to do trade through Benin Republic.

The President was also of the opinion that the new rail would help Nigeria to compete with Benin Republic.

Contrary to the demand by the Southern Governors for the ban on open grazing, he also hinted at reviving cattle grazing routes and grazing areas, previously set across the country in the 1960s.

The southern governors had in May declared a ban on open grazing, to curb the incessant violent conflicts between herders and farming communities.

When asked if he agreed with the AGF’s position, Buhari laughingly responded, “You want me to contradict my attorney-general?”

Explaining further, he said, “What I did was ask him to go and dig the gazette of the 1st Republic when people were obeying laws. There were cattle routes and grazing areas. Cattle routes were for when they (herdsmen) are moving up country, north to south or east to west, they had to go through there.

“If you allow your cattle to stray into any farm, you are arrested. The farmer is invited to submit his claims. The khadi or the judge will say pay this amount and if you can’t the cattle is sold. And if there is any benefit, you are given and people were behaving themselves and in the grazing areas, they built dams, put windmills in some places there were even veterinary departments so that the herders are limited. Their route is known, their grazing area is known.

“But I am telling you, this rushing to the centre (sic) so I asked for the gazette to make sure that those who encroached on these cattle routes and grazing areas will be dispossessed in law and try to bring some order back into the cattle grazing.”

He also lamented the style and utterances of Benue State Governor, Samuel Ortom, who had not only implemented an aggressive anti-open grazing law but had accused Buhari of failing to take actions against herdsmen because he is also a member of the Fulani herders.

Buhari said indeed, he is a Fulani man but Ortom was being unfair to him. He said he had told Ortom that the herdsmen perpetrating the attacks are not the Nigerian ones.

The President further explained that the Tivs, which form the majority in Benue, and the Fulanis had been engaged in cultural conflicts for a long time.

He added, “The problem is trying to understand the culture of the cattle rearers. There is a cultural difference between the Tivs and the Fulanis. So, the governor of Benue said I am not disciplining the cattle rearers because I am one of them.

“I cannot say I am not one of them but he is being very unfair to me and I told him that the Nigerian cattle rearer was not carrying anything more than a stick sometime with a machete to cut some trees and feed his cattle but those sophisticated ones move with AK 47.

“So, from other areas, people rush to Nigeria you know and Fulanis from Mauritania and Central Africa look the same so they feel they are the Nigerian ones and I assure you that we are trying to resuscitate these cattle routes, grazing areas and make them accountable.”