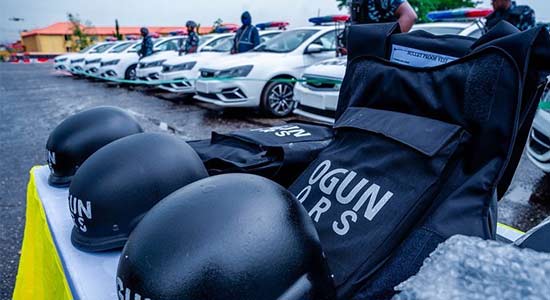 Ogun State Governor Dapo Abiodun on Friday officially handed over 55 patrol vehicles, motorcycles, 200 bullet proof vests, a number of helmets and communication equipment to the Inspector General of the Police, Usman Alkali Baba, who was on an official visit to the state.

Abiodun said the presentation of the security vehicles and gadgets to the police was another symbolic representation of his administration’s commitment towards providing a safe environment for all the people of the state.

He said the donation which included 35 saloon vehicles; 20 pick-up patrol vehicles; 200 bullet proof vests and helmets to the police and other security agencies in the state, was the second one to be done since he assumed office as governor.

Abiodun noted that the gesture was part of his government’s continued collaboration and cooperation with the security agencies, to improve security of lives and property in Ogun.

The governor, who said that apart from donating equipment and gadgets to security agencies in the state, his administration has also continued to support all the security agencies with other forms of logistics.

He noted that though the police and other security agencies are on the Exclusive List of the Nigerian constitution, security apparatus in Ogun would continue to receive necessary support to enhance their crime-fighting abilities.

While noting that security is important towards improving the Ease of Doing Business, Abiodun said “the procurement and donation of security equipment is also to further motivate men and officers of security agencies for improved efficiency and effectiveness, in the discharge of their constitutional roles in fighting criminality”.

The governor added: “Our administration will remain unwavering in our commitment to ensure that lives and property are secured in Ogun State. Some people have tested our will at different points, but we have also shown them that Ogun State will never be a haven for criminals or criminal tendencies.

“Let me use this opportunity to commend all men and officers of security agencies in Ogun State for their professionalism, commitment and dedication.

“However, there is a need for significant increase in enrolment of community policing and welfare of the men. Distinguished ladies and gentlemen, we all have justification for the apprehensive situation in our dear country.

“However, we all have our roles to play. We must continue to cooperate with our security agencies in fishing out those criminals”.

The governor, who disclosed that two of the six armoured vehicles ordered had been delivered, also said water cannons and other anti riot equipment would be procured for the police.

He, however, read a riot act to people fomenting security breaches in the state, declaring his administration would not tolerate any efforts to truncate the peaceful and pristine environment of the state.

Earlier in his remarks, the IGP Alkali Baba thanked the governor for the gesture, noting that no security outfit in the world can succeed without mobility and communication gadgets.

The IGP who dubbed Abiodun a “security conscious governor”, said the donation would go a long way in ensuring security of lives and property in the state.

“Security is everybody’s business; we appreciate you for making our jobs easier by giving us tools to work. No security outfit in the world can succeed without mobility and communication gadgets. The body armour will give personnel courage to confront crimes.

“This will go a long way in ensuring the security of lives and property in Ogun state and I want to assure that we will be ruthless on those posing a serious security threat to the peaceful coexistence in the country,” the IGP stated.