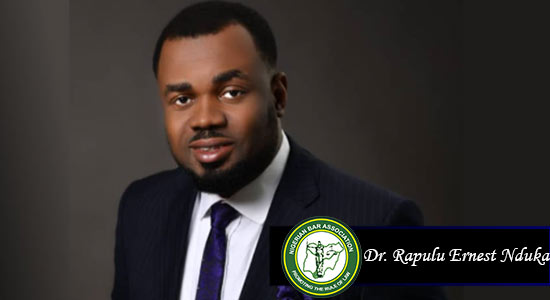 The Nigerian Bar Association, NBA, has reacted to the statement of EFCC on the alleged harassment and assault on the person of the Chairman of Makurdi NBA Branch by officers of the Commission (EFCC).

In a statement made available to TheNigeriaLawyer signed by its National Publicity Secretary, Dr. Rapulu Nduka, NBA says the stance of EFCC is not consistent with the eye witness accounts of the Attorney-General of Benue State and other officers of state government

Therefore, the NBA pledges to get to the root of the matter.

On the 9th day of June 2021, the leadership of the Nigerian Bar Association (“NBA”) received a report of unwarranted assault on the Chairman of NBA Makurdi Branch – Mr. Justin Gbagir, by officers of the Markudi office of the Economic and Financial Crime Commission (“EFCC”), on the 8th day of June 2021. It was reported that Mr. Justin Gbagir had gone to the EFCC Office to effect the release of a member of the Makurdi Branch detained by the EFCC.

Upon receipt of the said report, the leadership of the NBA reached out to the Economic and Financial Crime Commission (“EFCC”) which promised to investigate same. However, our attention has been drawn to a statement credited to Mr. Wilson Uwujaren – EFCC Head of Media and Publicity, accusing Mr. Justin Gbagir as the aggressor who led a team of thugs to the EFCC office.

From the report available to the NBA, during the incident, Mr. Justin Gbagir was in the company of some senior members of the profession and officers of the Benue State Government including the AG of Benue State, the DPP, the Solicitor-General of the State, the Senior Special Assistant of the Governor on Legal Matters and other leading lawyers. Their eyewitness accounts completely contradict the EFCC’s position.

The NBA President have since intervened in this matter and is taking up this particular incident and the general harassment and intimidation of lawyers by EFCC operatives with the leadership of the EFCC.

The NBA pledges to get to the root of the matter and will ensure that the officers behind such brazen acts of inhumanity are brought to justice and that abhorrent acts of this nature do not reoccur.