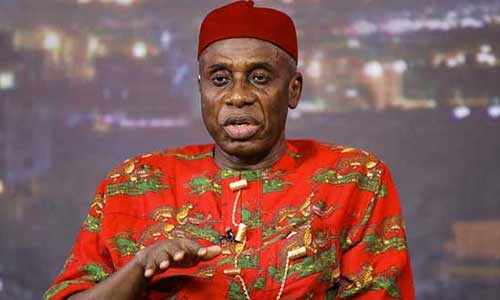 The Minister of Transportation, Mr. Rotimi Amaechi yesterday lamented that the burden of poverty in Nigeria continued to weigh heavily on the country despite some poverty reduction policies initiated by the administration of President Muhammadu Buhari.

Amaechi, a former governor of Rivers State, argued that it was either that the poverty reduction schemes “are not well thought out or the resources committed to them are too meagre to make any significant impact.”

He made the assertion while delivering the convocation lecture at the 49th graduation ceremony of the University of Nigeria, Nsukka (UNN) yesterday.

The minister, in a lecture titled “‘Inequality and the Dignity of Man,” argued that focus on rural communities would be effective in tackling poverty and inequality in the land.

He observed that the Buhari administration had embarked on a cocktail of measures targeted at reducing desperate poverty among the most vulnerable segments of our populace.

“It is hoped that these schemes will over time converge to reduce the magnitude and demographics of the poor in our midst. Previous government efforts have also contributed significantly in reducing poverty over the years.

Amaechi therefore called for a change in the development policies of the government to affect rural communities as much as it does urban areas, saying there were areas that should be addressed “to overcome frightening inequality and poverty. We must free our policies from an urban focus.

“The poorest urban Nigerian is many times better off than the most well off rural Nigerian. Therefore, we need to emulate the Chinese and Indian examples in focusing on the rural majority if we must end the increasing marginalisation of our rural compatriots.

“Our current land title and tenure systems have continued to consign our rural landowners to peasant holders of acres of farmland without commercial value.

“We need to reform our land title system by removing encumbrances on rural land titles so that rural farmers can use such land to access credit from the banks and credit unions.

“Inequality has produced an anarchic population as life has become a scramble and a hustle among many. Poverty induced criminality has sent crime statistics through the roof nationwide resulting in the culture of perennial insecurity that now haunts the nation.

“A resource poor treasury has led to considerable decay in the capacity of the state to equip the armed and security forces adequately to contain an upsurge in crime and militant nationalism and regionalism.

“Our hospitals and healthcare delivery system is in desperate disrepair just as our public infrastructure has continued to decay over the years,” the minister said.

Citing examples of how other countries successfully fought poverty, Amaechi evaluated the effect of poverty reduction policies in China, India and Brazil, which he said, were once in the socio-economic crises that Nigeria was facing today.

If it could work in those countries, according to the minister, then it can work in Nigeria, despite its very peculiar situation.

He said the achievement of the Chinese in poverty reduction had been equated with a modern day miracle.

The minister explained that the achievement “corresponded with a period of sustained economic growth. It adopted the strategy of focusing on the poorest people in the rural areas. It massively moved them from poor homes in the countryside to apartment blocks in urban areas.

“This is similar to the strategy adopted by the late Lee Kuan Yew, Prime Minister of Singapore, in tackling poverty among the slum dwellers of Singapore.

“This led to rapid urban renewal and the uplifting of the standards of living among the former slum dwellers with corresponding economic empowerment.”

In India, Amaechi said four basic schemes were adopted, targeted at alleviation of poverty in rural areas as a priority.

He, first, cited the Rural Livelihood Mission, which according to him, guaranteed the rural poor access to finance to increase household incomes, entitlement to rights, increased access to participation in the national economy through participating in banking and insurance services.

He, also, cited the Mahatma Gandhi Rural Employment Guarantee Act 2005, which he said, was designed to guarantee the livelihood of rural people.

According to him, it is an employment guarantee scheme that assures individuals of a minimum of 100 days minimum wage employment.

He, equally, mentioned India’s Rural Housing Guarantee Scheme designed to provide housing for all by the year 2022, saying the scheme guaranteed the rural poor access to permanent housing with electricity, LPG connections, pipe borne water and toilet facilities under an affordable mortgage arrangement that is both simple and affordable.

He, finally, cited the public distribution system “aimed at managing food distribution and reducing the scarcity of essential food items to rural dwellers at affordable prices.

“It is designed to address the problem of food insecurity in the rural areas. This combination of policies and strategies has assured India of a modest poverty reduction rate of 13.65 million people per annum in the last twenty years.”

Amaechi advised the graduates “to embrace the challenges and opportunities the outside world holds, with courage. The moment of graduation holds special meaning for both the graduates and their parents.

“For those graduating, it is the fulfilment of a set of hopes, the completion of one leg of a race in life and the beginning of yet another lap. The world outside the university campus holds infinite possibilities and surprises. It is different from what you have on campus.

“It is real and sometimes shocking. But it holds the invaluable treasure of experience without which we cannot face life. I hope you all find it an exciting ride especially in our time and place. In a world of dwindling opportunities and immense challenges,” the minister explained.

He, therefore, urged graduates to embrace the realities with courage and determination, which according to him, require creativity to convert every challenge to opportunity