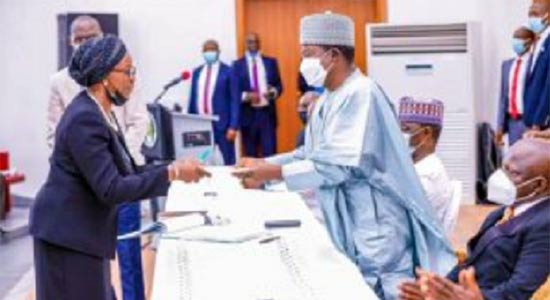 Gov. Simon Lalong of Plateau on Tuesday swore in the new Acting President of the Customary Court of the state, Mrs Blessing Dalyop.

The swearing-in ceremony took place at the Government House, Jos.

Lalong charged the acting president to discharge her duties faithfully, according to the laws of the land and the oath she had taken

“You have built a good name and reputation over the years and cannot afford to throw such rich pedigree away over any temptation.

“Your experience and record of service having risen through the ranks, gives me no doubt that you will perform excellently well and advance the cause of justice delivery in our State.

“We also expect you to continue on the path of reform of the judiciary for more effectiveness,” he said.

He said that the judiciary was critical for the stability of the country, thus its sanctity, integrity and independence must be defended at all costs.

The governor said that the feat could be achieved through ensuring that decisions were taken according to the laws of the land, and in line with good conscience.

He expressed the hope that Dalyop’s duties would be made easier, following preparations for the autonomy of the judiciary in the state.

“We have to redouble our efforts in digitizing our Courts to ensure that Information and Communication Technology platforms are available for both Judicial Officers, lawyers and litigants.

“This will increase efficiency, speed, accuracy, record keeping and access to information in our Courts” Lalong said.

He urged the judiciary to speedily deal with cases involving suspects whom were arrested for crimes such as attacks on innocent citizens, kidnapping and cult activities.

“Just yesterday, we woke up to report of horrendous attacks in Sabon Layi, Kuru where criminals killed and injured innocent people going about their lawful businesses.

“These attacks are getting prevalent and worrisome. This requires us to fully apply the provisions of the law in bringing the perpetrators to justice and creating deterrence.

“Our people must be protected and made to feel safe as we consolidate on the peace and security of our state,” he said.

The governor assured the judiciary that the executive would work hard to foster cordial working relationship with other arms of Government for the benefit of the people.

In her response, Dalyop thanked the governor for the previlege to serve and promised to discharge her duties diligently.

She appealed to Plateau people for prayers for the success of her tenure, saying that the responsibility required boldness and courage. (NAN)