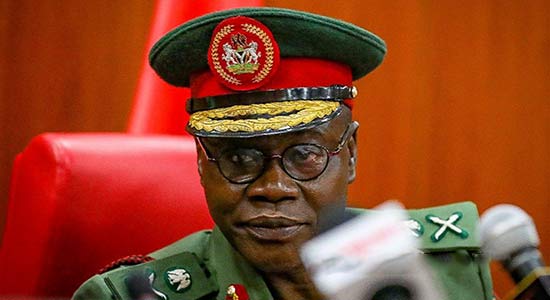 …As Reps Seek Synergy Among Security Agencies To Defeat Insecurity

Newly appointed Chief of Army Staff, Major General Farouk Yahaya told the House of Representatives Committees on Defence and Army that he joined the Nigerian Army about 36 years ago, one year above the 35 years mandatory retirement period in public service.

This is coming as the House of Representatives insist on synergy among the security services in the country in other to win the war against insecurity.

The minimum age for enlisting into the Nigerian Armed Forces is put at 18 years old for voluntary service and are expected to retire from service at 55 years or after putting in 35 years of service according to the Federal Civil Service rules.

The new Army Chief is 55 years old this year and has put in 36 years into the service of the Nigerian Army.

Speaking when he appeared before the joint committee of the House for confirmation as the new Army Chief, Yahaya said he was coming on board as the head of the Army with 36 years of experience as well as a load of experience from his various service units.

Yahaya, a member of Course 37 at the Nigeria Defence Academy however assured that when confirmed, he will have a very close working relationship with other service chiefs whom he said he had worked with in the same mission in the past, with a special nickname they often called themselves.

He said; “I joined the military 36 years ago. So I bring along with me, 36 years of military experience, having joined the Army in September 1985 as a member of course 37 at the NDA. I have had experience commensurate with my career. So, I’m abreast with the security requirements of Abuja, and so on.

“I have been involved in several security operations. The challenges we are facing now, all are characterized by the areas I mentioned, where I have firsthand information and have commanded troops and I administered them in achieving what we’ve done.

“I believe I have the requisite requirements by the grace of God to now provide my services in this office of the chief of Army Staff if confirmed. What I am bringing is wealth of experience and commitment. So I’m committed and determined to provide my best having known what is required to achieve results.

“Security is everybody’s business because the job cannot be done by one person. So we need all the support. And with the support of the people will win our fight against insecurity.

“From experience this job cannot be done by any single service or entity. Indeed in the Army, the Army itself is a group work not individual that’s why we arranged in sections and companies and battalions and brigades.

“This job is collective and as it was captured in the vision of the late Chief of Army Staff and in my own Mission too. There is also mentioned of joint environment in what we do, having realized that this job is not one service’s job.

“Not only that, it also requires the collaboration of other agencies, services and stakeholders. We have always operated together. That is why you see the composition of a joint team made of the Army, Navy, Airforce and now including the Police, DSS, and Civil Defense.

“As we know, internal security is intelligent driven operation. So we need others, including communities, including traditional rulers and all others who can provide information. We need to work together.

“At the Defence headquarters level, all the Service Chiefs now we are all mates at the Academy. At one time or the other, all of us work together. So the synergy can’t be anything better now that we’re brought up together, we have trained together.”

In his remark, Chairman of the House Committee on Defence, Rep. Babajimi Benson said the exercise was unique in view of the sad event that has necessitated its repeat, following the death of the immediate past Chief of Army Staff, Lt General Ibrahim Attahiru.

He said further that “this exercise comes at a very challenging time in the history of our dear country, Nigeria. Our nation has been besieged by several security issues across all the geo-political zones with banditry, militancy and self-secessionists stretching our military to the extreme.

“The worst is the lingering insurgency in the North-East. This war has cost the country a lot both financially and in terms of human lives. This must stop. The Armed Forces of Nigeria needs to adopt innovative measures to curb the killings and wanton destruction of property as a result of these cases of insecurity.

“I therefore, hope that, if confirmed, the new Chief of Army Staff will do everything possible, working with other service chiefs, to bring this to an end. You will agree with me that Nigeria deserves a re-invigorated Armed Forces that is robust, well-trained, adequately equipped, efficient and fully motivated to protect Nigerians from the devastating effects of terrorism and other security challenges in the country.

“This screening exercise comes at the heels of Nigeria’s twenty two years of uninterrupted democratic experience. I must say that the relationship between the National Assembly and Armed Forces of Nigeria has progressively improved as the parliament continues to exercise the necessary democratic oversight of the defence sector.

“Let me reiterate the firm resolve of the 9th House of Representatives, ably led by the Rt. Hon. Femi Gbajabiamila and particularly, the Committees on Defence and that of Army’s pledge to continually ensure a secure, peaceful and prosperous country for all Nigerians. We will therefore continue to work with the Armed Forces of Nigeria to achieve this.

“Let me assure you that the Joint Committees on Defence and Army will be thorough, transparent and sincere in the conduct of this screening. We owe this to Nigerians as their representatives. Consequently, we seek your cooperation as we embark on this constitutional legislative process.

“The worsening security situation in the country has been blamed on lack of functional local government system arising from inefficiency and absence of fiscal federalism to enable them carry out their constitutional responsibilities.”