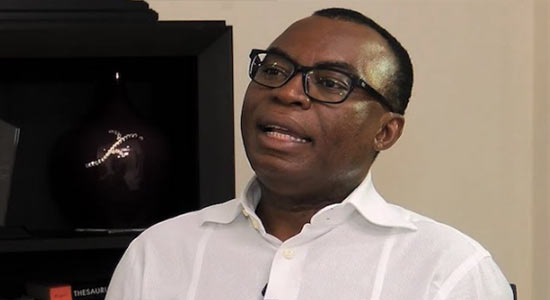 It is possible for Nigerians who conduct their business on Twitter to sue the Federal Government (FG) for interfering in their business relationship with Twitter.

This is according to Professor Fidelis Oditah, President, International Law Association, Nigeria.

Professor Oditah said this while answering questions on an Arise News television programme aired on Wednesday.

Reacting to the claim by Lai Mohammed, the Minister of Information, that Twitter and its owner Jack Dorsey are liable for losses incurred during the EndSARS protest, Professor Fidelis Oditah a Queen’s Counsel and Senior Advocate of Nigeria (SAN), said: “It is difficult to see the basis of any such claim. As I understand what Mr Lai Mohammed is saying, he has suggested that Jack Dorsey the founder of Twitter did three acts which individually and collectively constitute wrongdoing and that Twitter is somehow vicariously liable for the acts of Mr Jack Dorsey.

“What I’d like to do is to look at the three acts or actions which Lai Mohammed relies on.

“The first he says is that Jack Dorsey raised some funds through bitcoins to sponsor the EndSARS protest of last year.

“Secondly, he says that Jack Dorsey retweeted some posts by some coalitions that were sympathetic to the EndSARS protests.

“And finally, he says that Jack Dorsey launched an emoji which gave greater visibility to the EndSARS protests on the microblogging site.

“Now it is clear to me that individually and collectively those three acts do not constitute any form of wrongdoing at all.

“As you must be aware, many Nigerians donated to the EndSARS movement. I am not aware of anyone who has pursued any of them for donating money to the EndSARS protest.

“Secondly, to retweet a post by itself is not a tort I am aware of.

“Neither is it a tort to launch an emoji to give greater visibility to the EndSARS on the Twitter site.

He added that the “claims appear to be hopeless at least on the basis of the facts we know about.”

The QC also stated that he was not sure of the relationship between Jack Dorsey and Twitter other than that he is the founder, or if Dorsey is involved in the day to day running of Twitter.

“In order to make someone vicariously liable you have to establish first of all a relationship requirement,” Oditah said.

On the economic impact of the 40 million Nigerians who use Twitter: 20 per cent of who use Twitter for business, 18 per cent for job hunting, and 45 per cent are unemployed youth, Oditah was asked if a class action against the government was a possibility by Nigerians whose businesses had been affected.

“So if someone has a business relationship with Twitter, and is able to conduct his or her own business on Twitter, the government action in deliberately banning Twitter which itself is wrongful might in certain circumstances give a Twitter user a cause of action against the government.

“And I think the government needs to behave more responsibly and to distinguish matters of personal ego from what is in the collective public interest.”