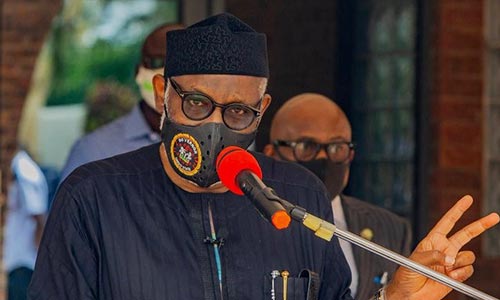 Governor Rotimi Akeredolu of Ondo State, on Sunday, said his government will continue to respect court order or any issue relating to his administration.

This was contained in a statement issued by the Chief Press Secretary to the Governor, Mr Richard Olatunde, who said the governor will not subvert the judgement and position of the Court on the issue of the Chief judge, Justice Oluwatoyin Akeredolu.

While reacting to the statements by the counsel to Justice Akeredolu, Mr Jubrin Okutepa, who alleged that the state government’s reaction to the ruling on the alleged plan to remove the CJ from office was “contemptuous”, Akeredolu said he will continue to respect the court order.

Olatunde said in the statement, said “The attention of the Ondo State Governor, Arakunrin Oluwarotimi Akeredolu, SAN, has been drawn to a statement made by Mr Jubrin Okutepa, SAN, lead counsel to the state Chief Judge, Justice Oluwatoyin Akeredolu, suggesting that the state government’s reaction to a court ruling on the alleged plan to remove the CJ from office was “contemptuous.”

“This statement by the CJ’s lead counsel did not come to the Governor as a surprise. Only people who understand the import of the Government statements would refrain from blunders.

“Moreover, Governor Akeredolu recognizes the profundity of civility. Nevertheless, he also understands that civility is not common. He, however, takes no offence in the outburst of the lead counsel.

“Governor Akeredolu challenges Mr Okutepa to feel free to approach the court if he truly finds the reaction “contemptuous.”

A Federal High Court sitting in Abuja had last week ruled that governor Akeredolu lacks the powers to remove Justice Akeredolu as the Chief Judge of the state.

When TheNigeriaLawyer reached out to him, Okutepa, SAN, said he will not reply Ondo government who engage in tale by moonlight to score political debating points

According to him, the public knows who engage in political falsehood. Thus he wouldn’t engage in dirty political argument with them

“I am too cultured to engage in dirty political arguments to amuse those whose stocks in trade is to act in sabotage and engage in constitutional insubordination.”