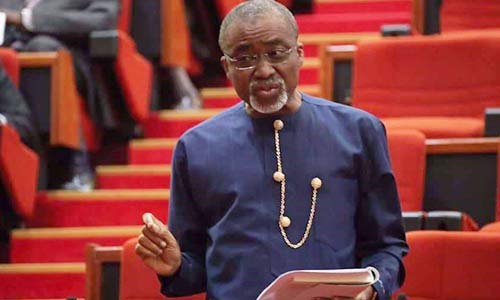 SENATE Minority leader, Senator Enyinnaya Abaribe has vowed that no amount of threat will stop Ndigbo from demanding equitable treatment in Nigeria, insisting that the marginalization has become unbearable.

According to Abaribe, despite the fact that Igbo are the glue that holds Nigeria, some people are trying to push them out but he said they are not going anywhere.

Speaking yesterday in Enugu at the inauguration of the Igbonine socio-cultural organisation, Abaribe lamented that Igbo have been pushed to the fringes irrespective of the fact that they are the glue that holds Nigeria together and as the highest domestic investors.

He said the present government is manifesting sectional leadership and unequal treatment, which he said has been the problem of Nigeria.

“We are being highly marginalized. This Union called Nigeria is stiflingly everybody in Nigeria not just Igbo but other regions and I am glad that we are making noise to see how to change the situation.

“We are the glue that holds Nigeria together. We are the highest domestic investors; We are the most travelled in Nigeria. In any part of Nigeria, after the indigenous people, the next is Igbo.

That is why anywhere you go you must see an Igboman. We are really the federal Nigeria.

“When they say want to leave, we say no, some people want to push us out. We are not going to leave Nigeria for anybody.

“We have a government today that is manifesting sectional leadership. Boko Haram has been killing people but nothing was done to them. When our boys were carrying flags running around, it was easy for them to get them proscribed as a terrorist organization but the same government refused to designate Boko Haram which everybody knows their activities, killing and destroying and bombing churches and institutions.

“When we challenge them, the Minister of Information said that Boko Haram was faceless but our boys were known.

“This unequal treatment of people has been the problem of Nigeria. We are feeling of being alienated. The alineation is spreading across the country no longer on Igbo.

“What we now have is that even though there is insecurity everywhere but they want to paint Igbo as the people causing the problems.

“Our country Nigeria today is supposed to be the inclusion of everybody because we are equal partners. We, the Igbo are the glue that keeps Nigeria. Therefore, there must be a deliberate effort to bring everybody together.

“Igbo have been pushed to the fringes. When it is time for their rights, they will like to push them around. I will not like when it is time to give President somebody will say there is a problem in Igbo land. Was there no trouble in the North West when Buhari was elected president?

In fact, Buhari was allegedly nominated by Boko-Haram during President Goodluck Jonathan’s Presidency to negotiate for them.

“No amount of threat will deter up from demanding for equitable treatment in Nigeria. Nobody will stop us from doing that even to the position of the President.