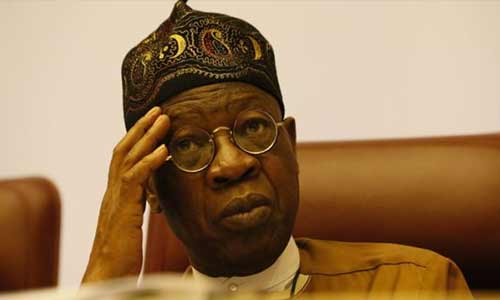 The Federal Government on Tuesday said that the only way it would allow the suspension of Twitter, a microblogging platform, to continue in Nigeria is when Twitter and other social media platforms operating in Nigeria are duly registered as Nigerian companies granted licenses to operate.

The minister stated this while addressing lawmakers in the House of Representatives at an investigative hearing on the ban on Twitter, organized by the House joint committee on Information, Justice, and Communication.

Justifying the suspension of Twitter, the minister said Twitter has made its platform to people of choice to promote activities that seek to distabilize Nigeria.

“We also said that OTT other social media platforms operating in Nigeria should registrar first and also set up offices here and employ Nigerians.

Explaining the legality of government action, Lai Mohammed cited relevant laws, saying that government was under obligations to safeguard national security infrastructure as provided for by law.

“In light of the provisions of the National Security Act, any person or organization that act in manners that threaten the internal security of Nigeria will not be tolerated, and in this wise, the activities of Twitter in Nigeria are inimical to the national unity and peace of Nigeria. For instance, during the EndSars protest, Twitter became a willing tool funding the activities of these protesters, a situation which degenerated into chaos leading to the death of many civilians and security personnel.

“We know that IPOB (Indigenous People of Biafra) is proscribed in Nigeria, but Twitter has made itself a platform of choice by which IPOB instructs its members to kill soldiers, police and other Innocent civilians who don’t agree with their ideologies.

Until Twitter and other social media platforms are registered in Nigeria with physical offices where taxes are paid, we will not shy away from doing the right things in the interests of the country” Lai Mohammed said.

Lawmakers while questioning the minister on the timing of the suspension as well as the necessity of social media regulation in Nigeria, a lawmaker from Akwa Ibom, Hon. Anikan Umana said government action was a symptom of Totalitarianism.

“What you have done looks like some symptoms of emerging totalitarianism”, Umana said, adding that ” it’s rather suspicious for you to have all the laws you pointed out but waited until the President’s was pulled down for violating Twitter rules before you enforce laws that have existed for a long time.”

While Hon. Umana and others berated the government for being reactionary in its suspension of Twitter, lawmakers such as Hons: Uche Ogah from Ebonyi and Muhammad Fatuwa, from Katsina called for absolute regulation of social media in Nigeria.

Ogah said: “Given the series of provisions outlined by the Hon. Minister, my only misgiving is why have not enforced these since, because social media whether we like it or not poses existential threats to us all depending on who’s using it. You go to China, you see that it’s a heavily controlled social media environment, so why don’t we apply same regulations?”

Hon. Fatuwa, on the other hand called for the absolute ban on social media in Nigeria, saying that Nigeria and Nigerians existed and lived well before social media.

Explaining the timing of the suspension of Twitter, Lai Mohammed said: “We didn’t suspend Twitter because of Mr President’s twit being pulled down.
People do businesses on twitter, but they also do more businesses on other social media platforms.”

He said Twitter had reached out for talks, and that government has set up a team led by himself to interface with Twitter with a view to reaching an amicable settlement.

“The doors are not closed, twitter has written a letter seeking dialogue with government and there’s a team chaired by my humble self and we will be having a meeting to fashion out a way forward. But before twitter will be allowed to operate in Nigeria, they must first register as a Nigerian company, after which they will apply for licence to operate,” he said.

He therefore warned Nigerians using VPN to twit to desist as it exposes them to cyber attacks through their personal data made vulnerable by VPN.

“When you use VPN, your personal details including bank details are exposed. If anyone thinks using VPN to twit will hurt Lai Mohammed, they are only hurting themselves”, the minister cautioned.