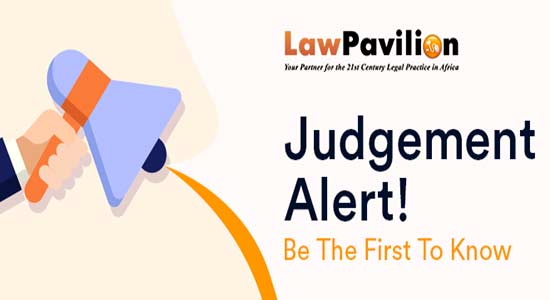 Be The First To Know By LawPavilion

The Appellant, as the Defendant at the High Court of Akwa Ibom State, was arraigned on a one count charge of murder under Section 326 (1) of the Criminal Code Cap. 38 Vol.2 Laws of Akwa Ibom State of Nigeria. It was alleged that the Appellant stabbed the deceased with a knife on his chest, thereby causing the death of the said deceased person. The accused person pleaded not guilty to charge and the case went into full blown trial in which the prosecution called two witnesses and tendered several documentary exhibits including Appellant’s confessional statements, photographs of the deceased as well as the composite documents relating to the autopsy conducted on the deceased.

The accused person testified in person but called no other witness. Appellant’s Counsel however objected to the confessional statement on the ground that the prosecution’s witness who sought to tender it was not aware of the statement. At the conclusion of the trial, the Appellant was found guilty and convicted for murder. He was accordingly sentenced to death by hanging.

The appeal was determined on the lone issue:

“Whether the prosecution had proved the charge of murder against the Appellant to justify his conviction.”

Appellant’s Counsel contended that the Appellant’s extra – judicial statement was involuntarily obtained and that despite protestation of Counsel, same was relied upon in convicting him without conducting a trial within trial to determine its voluntariness. Counsel also submitted that there was no legally admissible evidence justifying the conviction of the Appellant and described the evidence of the first prosecution witness as hearsay evidence. He contended that the failure of the prosecution to bring as a witness the police officer who subsequently investigated the case as well as failure to tender the recovered weapons amounted to withholding evidence and was fatal to the prosecution’s case.

On the other hand, Respondent’s Counsel submitted that the death of the deceased was established by the prosecution and that the injury sustained by the deceased resulted in his death. According to Counsel, the Appellant knew or ought to know that by stabbing the deceased on the chest, it would cause the deceased grievous bodily harm or death.

Counsel further submitted that it is only when an extrajudicial statement is alleged to have been obtained involuntarily that an accused or his Counsel could raise an objection to its admissibility and the Court will then be bound to conduct trial within trial. He went on to contend that denial of making a confessional statement is not synonymous with the allegation that it was involuntarily made.

On the whole, the Court of Appeal held that there was no merit in the appeal and the same was accordingly dismissed. Consequent upon this, the Court affirmed the decision, conviction and sentence of the trial Court.

“The Appellant as stated earlier in this judgment was arraigned before the lower Court for the offence of murder under Section 326 (1) of the Criminal Code Cap.38, Vol.2 Laws of Akwa Ibom State of Nigeria. The prosecution in the present case must therefore prove beyond reasonable doubt that Otobong Mfon Asuquo died and that his death was caused by the Appellant. The prosecution must further show that the act of the Appellant which resulted in the death of the deceased, Otobong Mfon Asuquo is one of the six circumstances listed in Section 323(1) of the said Criminal Code Law. That is to say:

(a) If the offender intends to cause the death of the person killed or that some other person,

(b) If the offender intends to do to the person killed or to some other person some grievous harm;

(c) If death is caused by means of an act done in the prosecution of an unlawful purpose which act is of such nature to be likely to endanger human life;

(d) If the offender intends to do grievous harm to some person for the purpose of facilitating the flight of an offender who has committed or attempted to commit any such offence;

(e) If death is caused by administering any stupefying or overpowering things for either of the purposes last aforesaid;

(f) If death is caused by willfully stopping the breath of any person for either of such purposes.

“The third ingredient was also satisfied as it is evident that stabbing the deceased on the chest with a lethal object (knife), the Appellant knew or must have known that death or grievous bodily harm would be the likely result. The intention to kill or to cause grievous bodily harm, which resulted in death, is sufficient to establish the offence of murder. See GWOJILIRE V. STATE (1965) NNLR 52, BAKARE V. STATE (1987)1 NWLR (part 52) 579 and RICHARD V. STATE (2018) 18 NWLR (part 1651) 224.” Per SHUAIBU, J.C.A.

“Learned Counsel for the Appellant also made an allusion as regards the failure of the prosecution to tender the recovered weapon of the crime. There is no law requiring the tendering of the weapons of an alleged murder to establish guilt of an accused person. Whereas in the instant case, there is cogent and reliable evidence that the Appellant stabbed the deceased on the chest with knife, there is no duty on the trial Court to insist on its production as the tendering of weapon of crime is not sine qua non in proving guilt of an accused person. The tendering of the weapons used depends on the circumstance of the case. See STATE V. FADEZ (2018) 18 NWLR (part 1650).” Per SHUAIBU, J.C.A.

“Again, by virtue of Section 72 (2) of the Evidence Act, 2017 a person is said to be acquainted with the handwriting of another person when he has seen that person write, or when he has received documents purporting to be written by that person in answer to documents written by himself or under his authority and addressed to that person, or when in the ordinary course of business, documents purporting to be written by that person have been habitually submitted to him. Thus, the learned trial judge was also right to have admitted Exhibit C through PW2 who is familiar and acquainted with the handwriting of his colleague, Insp. Egbunu who was the 2nd investigating police officer after him. In SANMI V. STATE (2019) 13 NWLR (part 1690) 551 at 582, the Supreme Court was emphatic that the Nigerian Police is an institution where any of its officers can take over investigation of a case from another officer and indeed produce document that were executed by the previous officers and tender them in Court for the purpose of proving the prosecution’s case. The fact that Insp. Egbunu who recorded Exhibit C was not called as a witness was not fatal to the prosecution’s case.” Per SHUAIBU, J.C.A.