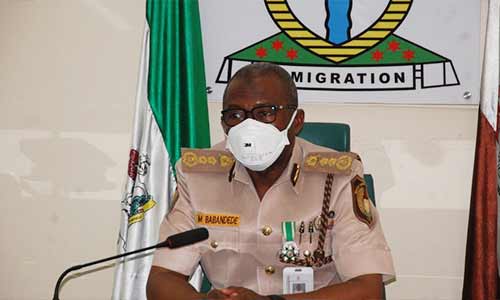 A National Industrial Court in Abuja has dismissed a suit querying the legitimacy of the decision by President Muhammadu Buhari to extend the tenure of the Comptroller-General of Immigration (CGI), Muhammed Babandede.

Justice Olufunke Anuwe, in a judgment on Wednesday, held that the plaintiff, an Abuja-based lawyer, Daniel Makolo “lacked the requisite locus standi (the legal right) to file this suit.”

Justice Anuwe, who upheld the notices of preliminary objection filed by the defendants, held that Makolo failed to show how the retention of Babandede by President Buhari negatively affected his interests or rights.

The judge noted that Makolo did no show in any way how Babandede’s continued stay in office caused him any injury, affected his interest or his rights.

She held that having found that the plaintiff lacked the locus standi to have instituted the suit, it meant that the suit was dead on arrival.

Justice Anuwe proceeded to dismiss the suit without hearing it on the merit.

Makolo, while reacting to the judgment, said he would appeal.

The judgment was on the suit, marked: NICN/ABJ/196/2020, with the Minister of Interior; the Director/Secretary of the Civil Defence, Correctional, Fire and Immigration Services Board (CDCFIB); Babandede; the NIS; the Head of Service of the Federation (HOSF), Federal Civil Service Commission (FCSC); the National Security Adviser (NSA); the Secretary to the Government of the Federation (SGF) and the Attorney General of the Federation (AGF) as defendants.

Makolo had urged the court to determine whether Babandede, who was recruited into the Nigerian Immigration Service (NIS) on September 13, 1985 could, under any guise, lawfully remain in office beyond September 12, 2020 in the face of the provisions of the Public Service Rules (PSRs) 100238 and 020810 made pursuant to sections 160, 169 and 172 of the Constitution and sections 2 and 3 of the NIS Act 2015.

In a supporting affidavit, Makalo stated that Babandede has, since becoming the CGI, strictly applied the Public Service Rules (PSRs) 100238 and 020810, which provides the mandatory retirement ages and tenure of service for public officers, but that it is unjust that he is now unwilling to apply the same rules to himself.

Makolo added that Babandede ought to observe the provisions of the PSRs 100238 and 020810 like other civil servants employed at the same time with him in 1985 who have since vacated office in compliance with the rules.

He added that by the provisions of the PSRs, Babandede ought to proceed on the mandatory retirement leave on June 13, 2020 preparatory to his formal exit from service on September 12, 2020, and that having ignored the provisions, all his actions, including the disbursement of funds are illegal, and he should be compelled to make refund.

“The refusal, failure and neglect of the fourth defendant to proceed on retirement fuels the speculation that his failure to proceed on his pre-retirement leave is in his bid to cover his corrupt practices and those of his benefactors and protégé,” Makolo added.

He prayed the court to declare among others, that no known laws allow the President, either acting by himself or through any agency of government, to extend the period of service of a public officer with statutory tenure.

Makolo also urged the court to declare that Babandede’s (the fourth defendant’s) tenure, as a public officer employed on September 13, 1985 as an Immigration Officer, has ended and his further stay in office “is arbitrary, unlawful, immoral and unconstitutional.”