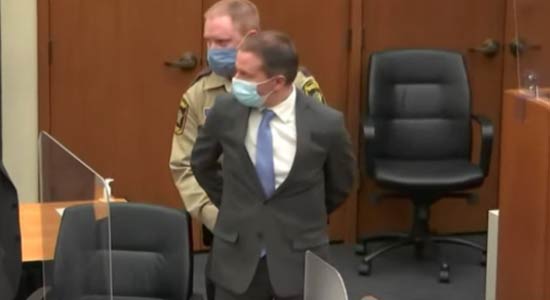 A Minnesota judge sentenced former Minneapolis police officer Derek Chauvin on Friday to 22.5 years in prison for the May 2020 murder of George Floyd.

Chauvin was convicted in April of second- and third-degree murder as well as second-degree manslaughter in Floyd’s death. He has since been held at the Minnesota Correctional Facility in Oak Park Heights, the state’s only maximum-security prison, about 25 miles east of Minneapolis.

Shortly before his sentence was handed down, the former officer stood up to address the court for the first time.

“I want to give my condolences to the Floyd family,” Chauvin said, adding that he was not able to “give a full, formal statement” because of “some additional legal matters at hand.” He ended on a cryptic note.

“There’s going to be some other information in the future that would be of interest, and I hope things will give you some peace of mind,” Chauvin told the Floyd family.

Chauvin, who is white, was one of three officers to pin Floyd, a Black man, facedown on a street during an arrest attempt. Chauvin knelt on Floyd’s neck for 9 minutes and 29 seconds as Floyd repeatedly stated that he couldn’t breathe and eventually ceased breathing.

Four members of Floyd’s family spoke in court before the sentencing, including his young daughter, Gianna, who recalled how her father would help her brush her teeth every night before bed.

“I miss you and I love you,” Gianna said, addressing her father, in a video shown to the court.

Two of Floyd’s brothers, Terrence and Philonise Floyd, along with a nephew, Brandon Williams, asked Judge Peter Cahill to impose the maximum sentence on Chauvin.

Terrence Floyd said his family was now part of a group of Black people whose loved ones were killed by police in America, adding, “It’s not one of those fraternities that you enjoy.” He then told the judge how desperately he wanted answers from Chauvin: “What were you thinking? What was going through your head when you had your knee on my brother’s neck?”

Floyd’s death sparked massive, monthslong protests across the country and an international reckoning with police brutality and racial injustice.

Prosecutors filed a memorandum earlier this month asking Cahill to sentence Chauvin to a minimum of 30 years behind bars. Chauvin’s legal team requested he receive probation or a shorter prison term.

Cahill, who oversaw Chauvin’s high-profile trial, ruled last month that the former officer could receive an aggravated prison sentence ― one that would be tougher than Minnesota’s sentencing guidelines. The judge said Chauvin abused his position of authority and treated Floyd with particular cruelty.

On Friday, the court heard for the first time from Chauvin’s mother, Carolyn Pawlenty, who read a statement that touched on her son’s childhood dream of becoming a police officer as well as how he has been portrayed in the media.

“The public will never know the loving and caring man he is, but his family does,” Pawlenty said. “Even though I have never spoken publicly, I have always supported him 100% and I always will.”

Chauvin’s legal troubles are far from over. In early June, he was ordered into federal custody pending federal charges over Floyd’s death.