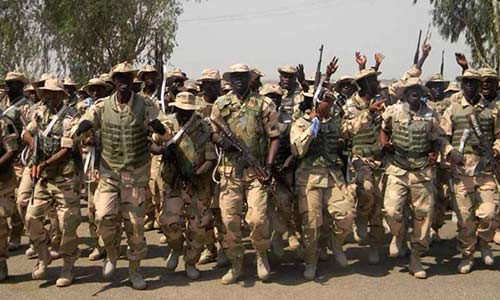 The major highway between Borno and Yobe states, Maiduguri-Damaturu highway was closed to traffic for about two hours yesterday as men of the Borno State Rapid Respond Squad engaged Boko Haram in a long shootout.

According to security source, the insurgents had taken a drive through the desert part with the intention of blocking the highway to kidnap travellers.

The shootout which started at about 3p.m. lasted for about an hour and half.

The RRS was about to thwart their movement as they were able to destabilise the insurgents after several shot of canisters of teargas.

According to the source, the insurgents had to retreat as they could not withstand the teargas

Though no one was said to have been lost on the two sides, but two armored vehicles belonging to the RRS were said to be destroyed in the attack.

The source said: “Boko Haram terrorist attacks at Garin Kuturu along Maiduguri- Damaturu road today at about 1630hrs was thwarted by RRS.

“The use of tear gas gave the police upper hand, while Boko Haram launched attacks on CTU and RRS Vehicle, the road was blocked for the commuters, after neutralising the road and ensuring safety of the civilians, they were escorted to Auno,

“Efforts to kidnap passengers was thwarted, the road is safe, no any form of abduction,” the source said the operation against the insurgents was led by Commander RRS Borno State, Abioye Babalola

The security source also revealed that two vehicles, a Sharon and Toyota Camry with registration number PKM 512 XA and KANO TRN 77 SY were recovered from the insurgents.

The Commandant RRS, Abioye Babalola confirmed the incident when he was called by our correspondent but did not however give the details

He said normalcy had been brought to the highway and commuters were able to travel on the road again.