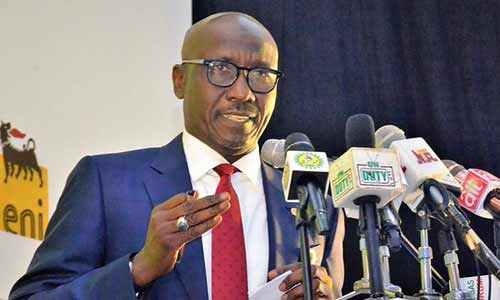 Group Managing Director of the Nigerian National Petroleum Corporation (NNPC), Mr Mele Kyari, on Tuesday, clarified no dime of Government funds will go into the planned 20 per cent equity stake acquisition in the $19 billion Dangote Refinery.

Speaking at a televised interview, Kyari said that the national oil company was already in talks with banks in Nigeria on how to close the deal on acquiring the stake.

‘We are going to borrow on the back of the cash flow of this business. We know that this business is viable, it will work, and that it will return dividends. It has a cash flow that is sustainable because it is a refinery business.

‘In the short term, it will continue to be sustainable. And that is why banks have come up to lend to us so that we can take the equity.’

According to him, all internationally laid down processes and procedures have been strictly followed in attempting to close the deal in the Dangote Refinery stake acquisition.

He added that a sound valuation procedure was also explored before arriving at the conclusion to acquire 20 per cent stake.

He added: ‘We have signed term sheets with the owner of the Refinery, I am not sure that Mr Dangote is very happy with it.

‘No bank will lend money to you to buy equity in a business of this scale if you have not followed the basic valuation process.

‘The reality is that we have a valuation of this refinery of about $19 billion. I don’t have the exact figure. We haven’t closed on this to answer your question straight.’

He said there is a governance code that requires the authority of the Federal Executive Council to close the deal.

According to him, the NNPC will be on the board of the Dangote Refinery as a shareholder and its books will be opened to the Corporation.

‘Petroleum is priced in naira in our country and you buy crude in dollars. It is a banking transaction between us and customers. The CBN is there to resolve it. Nigerians will not pay for products in dollars. The banks will do the conversion.

‘The refinery is coming into production. It will deliver over 50 million litres of gasoline into our market. We are also working on our refineries to make sure we fix them.

‘We have awarded the contract for Port Harcourt Refinery rehabilitation and ultimately we are going to close that of Warri and Kaduna very soon in July so that all of them will work contemporaneously”.

He foreclosed the possibility of suspending the payment of under-recovery or subsidy of petrol price in July because the negotiation with the Organised Labour is still ongoing.

On the benefit of having functional refineries, he said it will lead to a N21 savings on freight charges for petrol.

He added there will be an advantage of proximity of products to the consumers since refineries are in the country, instead of taking 14 days to arrive from Europe.

The NNPC GMD confirmed that the landing cost of petrol was N256 per litre last week, but assured that subsidy removal would not be done until all talks with relevant stakeholders are concluded.

On products smuggling, he said plans are afoot to battle the scourge in partnership with various security agencies.

He noted that Nigeria does not consume up to 60million litres daily but for smuggling that swelled it.

‘Fuel here gets to Sudan. Other African countries don’t have the kind of capacity we have to source dollars to import products. 60 million litres per day is not our consumption. But we’ve seen a drop of 6 million litres in the last one month due to our collaboration with EFCC, DSS and others. The numbers are coming down,’ he noted.