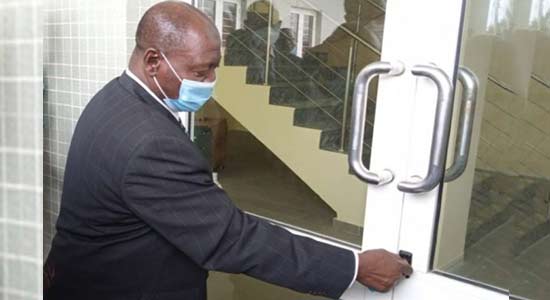 The Governor Babajide Sanwo-Olu led administration of Lagos State on Thursday, handed over the keys to the newly constructed Osbourne Courthouse to the state Chief Judge (CJ) Justice Kazeem Alogba.

The one-storey courthouse located at Osbourne, Ikoyi, Lagos is to temporarily replace the Igbosere High Court which was razed during the #EndSARS protest of October 2020.

The waterfront facility consists of eight courtrooms, eight judges chambers, offices for secretaries and registrars, a general office for administrative staff, a canteen, a litigants room, an office for the CJ and restrooms on every floor.

The state Attorney-General, Mr Moyosore Onigbanjo (SAN), at the handover ceremony said that the building of the courthouse was part of efforts the Lagos State Government to restore the state’s justice system after the losses suffered during the #EndSARS protest.

Onigbanjo who represented the Lagos State Government said that the courthouse is a temporary accommodation for some of the displaced judges pending when the burnt Igbosere High Court will be rebuilt.

The A-G said that plans are underway by the Rebuild Lagos team to reconstruct the razed Igbosere High Court.

He noted that the new court complex is modern and will be digitalized as part of the ongoing efforts to digitalize the courtrooms in Lagos.

Handing over the key of the complex to the CJ, the A-G said “We handover this key to you in fulfillment of the administration’s pledge of access to justice and putting the necessary infrastructure in place for the people of Lagos State to enjoy.”

Responding, the CJ thanked the Lagos State Government for the temporary accommodation.

He noted that the judiciary had encountered many challenges and frustrations as a result of the fallout from the #EndSARS protest.

“It is a mark of a good leader to immediately rise up to the occasion and find a place where judges can temporarily move to and work.

“You cannot know exactly the relief you’re giving us today particularly judges who will be moving into this complex.

“No other person can appreciate the trauma like a person who has been used to working and has been left unable to go to work for almost a year now after their properties have been burnt.

“When you’re idle, the trauma keeps reverberating but when you’re able to spring to work, you forget it bit by bit.

“That is the extent of the trauma of the judges whose properties were burnt and unable to resume work. Getting this edifice today will help the psyche of our judges a lot,”  he said.

Alogba also expressed gratitude to Mrs Aramide Adeyoye, the Lagos State Special Adviser for Works and Housing, the A-G, contractors and furniture makers who partnered with the judiciary on the project.

Assuring residents of the Osbourne area of their safety, the CJ said that the courts will sit at 9am and close no later 5pm on weekdays.

Following the handover ceremony, the CJ went for an inspection the ongoing construction of four-courtroom complex at Sabo, Yaba, Lagos.

The Yaba courthouse will accommodate both Magistrates and some of the judges displaced by the #EndSARS protests.