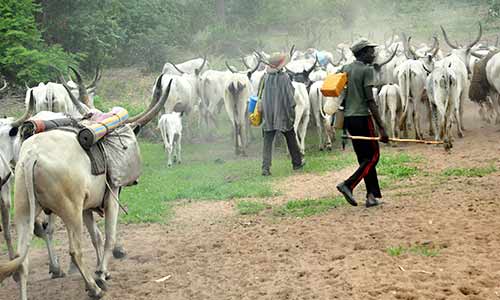 *I Am A Believer Of Constitution, I Will Not Support Any Step Taken Outside The Constitution – Gov. Makinde
*While Silver And Gold Were Bequeathed To Some States, Our Forefathers Left Land For Us – Ebonyi Governor
*Review Of Land Use Act Is Duty Of NASS, Not President – NBA
*I View Buhari’s Obsession For Grazing With Suspicion – Ifedayo Adedipe, SAN
*President Buhari Lacks Power To Singlehandedly Review Land Use Act – Yusuf Ali, SAN
*Review Of Land Use Act Has To Pass Through NASS – Tayo Oyetibo, SAN

Reactions have trailed the move by Federal Government to review the Land Use Act. Governments of some states, the Nigerian Bar Association and some Senior Advocates of Nigeria are unanimously in opposition to the move.

Recall that the Secretary to the Government of the Federation, SGF, Boss Mustapha, had on Thursday at the 51st annual conference of the Nigerian Institution of Estate Surveyors and Valuers in Abuja, said that the Federal Government was reviewing the Land Use Act of 1978 to take out sections of the Act that inhibited economic development.

However, the governors of Oyo and Ebonyi states have kicked against it. While responding to an inquiry on Wednesday, Governor Makinde of Oyo State through his Chief Press Secretary, Taiwo Adisa, said he is believer of constitution and would not support any step taken outside the constitution. According to him, the constitution has already vest land in states, thus, he wouldn’t support anything to the contrary.

“As much as we know, the Land Use Act is a constitutional matter and the states must be involved in anything that has to do with its review.

“The act has vested the lands in the governor of the state and we don’t envisage anyone taking contrary steps.” Makinde said

Similarly, the Ebonyi Government State through its Commissioner for Agriculture and Natural Resources, Chief Ogodo Ali, stated on Tuesday, that they are not in support of the review. That while gold and silver was bequeathed to some states, their own forefathers left them lands so they wouldn’t support anything that will hurt the people of the state

The commissioner, “I am a man under command and whatever my governor says, is what I stand for. But I know that the Land Use Act cannot be reviewed just like that. And to review the Act, it has to go through a lot of processes.

“I am of the opinion that once the state governments begin to kick against this kind of move from the Federal Government, I know my own governor. He will oppose it.

“And I know that my governor loves his people and he wouldn’t like anything to hurt his people and that was why he opposed Ruga. So, we have to toe the path where our people must be protected, without attacking any arm of the government.”

“If there is any proposed review to the Act, my advice to the President is that it should first be submitted to the floor of the National Assembly for debate.”

Some Senior Advocates of Nigeria, SANs, held the same view as NBA and warned that the President and the Federal Government lack power to singlehandedly review the Land Use Act.

Ifedayo Adedipe (SAN) wondered why President Buhari is obsessed over grazing which is a private business and not of government. According to him, the stance of the president is unfortunate.

He said, “As a Nigerian citizen, I really worry about the obsession of our President over this grazing issue.

“First of all, the National and State Houses of Assembly have to be involved before any amendment or review can take place. Nevertheless, I view with suspicion the attempt by the President to review the Land Use Act, considering his stance on this grazing issue.

“At this point, it is important to state that people engaging in animal husbandry do so for their own personal benefits. Grazing is simply one of many private businesses run by individuals, not the government. It is really unfortunate that the President has chosen to obsess over this issue.”

“The Land Use Act is part of the Constitution of the Federal Republic of Nigeria 1999 (as amended) and the constitution expressly states the method by which the Act can be reviewed. It is clear that the President cannot singlehandedly review a law; he has to first propose a review or amendment to the National Assembly before anything can be done.

“I am eager to see the changes the President wants to effect in the Land Use Act so I can ascertain the true purpose of this intended review.” Ali said

Tayo Oyetibo (SAN) made the same point as Ali. He said, “The Land Use Act has been integrated into the constitution so the procedure for amending the Act invariably involves the National Assembly. Although the President can initiate this process, it has to first pass through the National Assembly; there is no other way.

“What matters the most is that the constitutional provisions for the amendment of an Act must be complied with.”