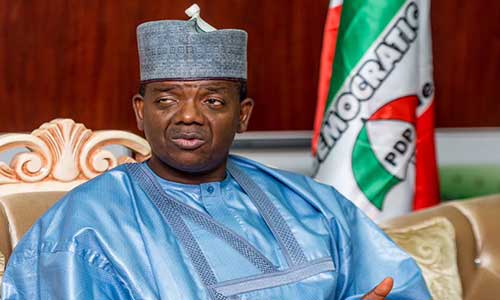 The All Progressives Congress on Friday reiterated its conferment of the leadership of the Zamfara State chapter of the party on Governor Bello Matawalle.

This is coming on the heels of the rejection of the governor’s leadership by former governor Abdelaziz Yari, and a party stalwart, Senator Kabiru Marafa.

The Chairman, Caretaker/Extraordinary National Convention Planning Committee of the party, Governor Mai Mala Buni, had while welcoming Matawalle into the party, dissolved the APC state executive committee and announced Matawalle as the new party leader.

However, Yari and Marafa had in separate interviews with the Hausa Service of the BBC, rejected Buni’s declaration, insisting that negotiations were still ongoing.

When contacted by Saturday PUNCH, via the telephone, on Friday, the National Secretary of the APC, Senator John Akpanudoedehe, said, “I align myself with our National Chairman, Governor Mai Mala Buni. He spoke the mind of the party; this is not a controversial issue.”

Also, a former governor of the state, Senator Ahmed Yerima, said as things stood today in Zamfara State, Matawalle was the leader of all members of the APC.

He said this in an interview with the Hausa Service of the BBC, monitored in Abuja on Friday.

Yerima said, “For every member of the APC in Zamfara now, whether he says it or not, the Constitution gives Bello Matawale the leadership of the APC.

“Because of that, all of us are under the leadership of the present governor of Zamfara State.

“That is why the National Caretaker Committee Chairman, when he went to Zamfara State, said from that day, the state executive of the party was dissolved and the leadership of the party had been bestowed on the Governor Bello Matawalle.

“Since we now have a governor, what he told the BBC has come true. Even among family members, there are instances where there will be disagreements between an elder brother and I younger one. That’s how politics is. As the Kaduna State Governor Nasir El-Rufai said, this is not the end of the matter. There will still be discussions on how a new caretaker leadership will emerge because a permanent leadership will be decided after the national body comes out with the guidelines for elections. Whoever God gives will be elected. What will I do with the leadership of the APC in Zamfara? I’m like a father to all of them. When I was governor, both Yari and Matawale served under my government.”

Giving a historical background to the crisis in the state chapter of the party, Yerima traced it to Yari’s decision to hand-pick candidates for the party ahead of the 2019 elections.

He said, “The former governor picked candidates before the elections. President Muhammadu Buhari sent me to Yari to inform him that he wasn’t in support of his decision. I went to Yari to deliver Buhari’s message.

“In response, Yari said it was a matter between him and the former national chairman, Adams Oshiomhole. When the President visited the Zamfara Government House, he repeated the message he sent me to Yari and said he would not support any of the candidates.”

Yerima spoke against the backdrop of the rejection of Matawalle’s leadership by Yari and Marafa.

The duo had in an earlier interview with the BBC, said, “One thing we do not agree with is the pronouncement by Governor Buni (who said Matawalle is the leader of the APC in the state), because it was not part of discussions we had with six of our governors (prior to Matawalle joining the APC).

“But when we went had there were disagreements; we discovered that some people claimed that the party leadership had been dissolved. There is no way that can happen because there is no one who has the authority to do so.”

It was gathered that supporters of Yari and Marafa are already spoiling for a fight as the party prepares to begin ward and state congresses.