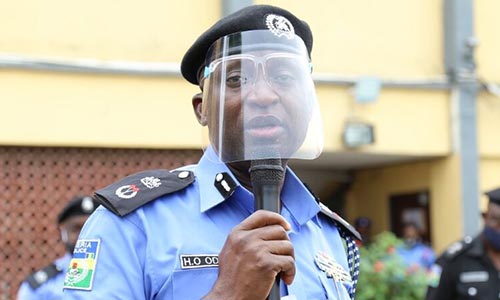 The Lagos State Police Command has denied stray bullet from its operatives killed a teenage beverage seller at Ojota on Saturday.

The attention of journalists and passersby were drawn to the body of a teenage girl with blood-stained clothes and a hole on her chest, suggesting a possible hit by a bullet during the Oodua Nation mega rally held at Freedom Park, Ojota.

The police had in the course of dispersing the agitators, fired gunshots into the air, shot teargas canisters and also used water cannons.

Although the deceased’s shop was nowhere near the park, cries by neighbours attracted attention to the back of the shop where her body was found and later carried by mourners to the front.

Neighbours blamed the police for killing her, insisting she was hit by stray bullet from operatives who were in hot pursuit of protesters.

But the command in a statement by spokesman, Olumuyiwa Adejobi, denied its operatives fired live bullets at the rally, describing the allegation as a calculated attempt to create confusion and fears in the minds of the good people of Lagos State and the country at large.

“The command did not fire a single live bullet at Ojota rally today. The said corpse was found wrapped and abandoned at a distance, far from Ojota venue of the rally, behind MRS Filling Station, inward Maryland, on the other side of the venue, with dried blood stains suggesting that the corpse is not fresh.

“After a close look at the corpse, a wound suspectedly sustained from a sharp object was seen on it.

“The news is false and mischievous. The command, therefore, urges the public to disregard the news and go about their lawful normal daily activities while investigation to unravel the incident will commence immediately.

“The Commissioner of Police, Lagos State, CP Hakeem Odumosu, commiserates with the family of the found deceased and assures that thorough investigation will be carried out.

“The command equally wishes to warn against the spread or peddling of fake and unconfirmed stories as such could be dangerous and counterproductive,” he said.

Aside from the body of the young girl, there was also video footage of a woman lamenting how teargas almost suffocated her and her young kids inside their home.

The woman who showed a tear gas canister that landed in her compound wondered why the police resorted to shooting the lethal weapon into places far away from Freedom Park.