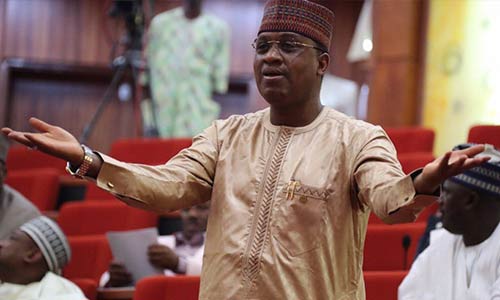 Senator Kabir Marafa, a leader of the governing All Progressives Congress (APC) in Zamfara State has described the defection of Governor Mohammed Bello Matawalle to the APC, from the Peoples Democratic Party (PDP), as a violation of the Supreme Court judgment, which declared that the APC had no candidate in the 2019 governorship election in Zamfara State.

The lawmaker of the Eight Senate in an interview on ARISE News, warned that if strong reservations expressed by the party members over the defection were not managed properly, they might snowball into a major crisis that would rock the very foundation of the party.

Justifying his opposition to Matawalle’s defection, Marafa stated: “The judgment made by the Supreme Court said APC ought not to have participated in the 2019 election. What that means is that there was no APC at all. Now, I’m asking this question and I want every Nigerian to tell me: Can a man that is non-existent give birth to children? No, he can’t.”

“So, any attempt by anybody to say he is the governor of APC, between 2019 and 2023 without reason of death or resignation that could have warranted issues of bye-election, cannot work. Doing so is acting against the judgment of the Supreme Court. You are making nonsense of our judicial system. These issues are going to come up.”

In what appears to be a sign of cracks in the ranks of the APC in Zamfara, Marafa distanced himself from the defection of the state governor, saying “We have accepted our fate. We are the ones that fought, we lost and we have accepted that in good fate. “Leave us where we are. You don’t have to rub it on us. Doing so will just ignite series of problems that might spell doom to APC. We don’t want it to happen, so, what people are saying is APC be fair, be just.”

He also stated why he believes Matawalle should not be the leader of the APC in Zamfara State.

He insisted that the Chairman of the Caretaker Committee of the APC, Mai Mala Buni, erred by announcing Matawalle as the leader of the party in Zamfara State.

“APC should let the sleeping dog lie. Mai Mala Buni, Chairman of its Caretaker Committee doesn’t have the power under the constitution to make such pronouncements,” he said.