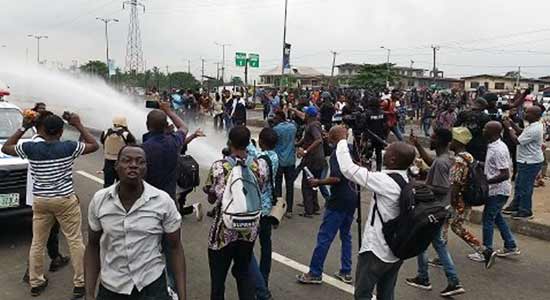 The Ojota venue of the Yoruba Nation rally has turned rowdy as police teargassed and also shot in the air to disperse protesters.

Police also sprayed water cannon on the protesters to forestall the breakdown of order.

Our correspondent observed that more security operatives including men of the Nigeria Police Force, Nigerian Army, and the Nigeria Security and Civil Defence Corps and their vans have been deployed to the venue of the protest.

The Police also arrested some protesters at the venue of the rally and were kept in the waiting Black Maria.

They also cordoned off the strategic points where the protesters had gathered.

Motorists and other road users have also been advised to ply alternative routes to their destinations.

Earlier, Odumosu while speaking to journalists, stressed that Lagos State can not afford to record and experience the violence orchestrated by some individuals during the #EndSARS protest that led to destruction of properties in the state.

Odumosu reiterated his stance that anyone caught participating or facilitating the so-called mega rally in Lagos State will be dealt with within the ambits of the law.

Meanwhile, the venue of the protest is calm as armed security agencies have taken over strategic points.

Security Operatives teargassed the protesters but the defiant protesters have refused to back down. 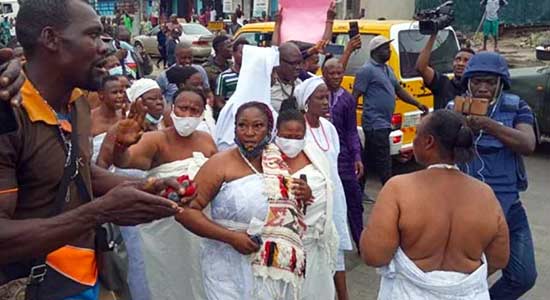 The traditionalists while speaking to police men urged them to protect them rather than teargass them.

The agitators led by Professor Banji Akintoye Ilana Oodua group had held similar rallies in other states in the South-West.

A yoghurt seller, identified simply as Jumoke, has been killed by bullets reportedly fired by a security operative dispersing Yoruba Nation agitators at Ojota, Lagos State.

Our correspondent, who sighted the girl’s corpse, observed that bullets had ripped open the victim’s stomach. She is said to be 14 years old.

She was reportedly displaying drinks at a shop when the bullet hit her.

Her body has been covered with a piece of cloth as a crowd gathered at the spot.

The lifeless body of the girl was crowded by sympathisers at the scene.

A resident who pleaded anonymity told our correspondent, when the protest went rowdy, the girl was about to open the shop when the stray bullet hit her.

Police visited the scene of the incident, and took her dead body away.