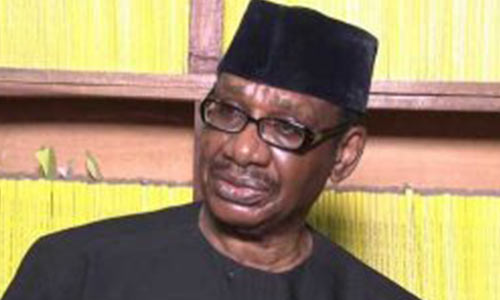 *Says Onochie Should Put On Another Coat, Not A Partisan One.
*I Am Displeased With APC Accepting All These People
*People Defecting To APC Are Opportunists
*Mala Buni, Going About Buying PDP People To Join APC.
*2023 It Is The Turn Of The South
*If Nigerians Need A Youth As President, Not Anybody Can Just Jump In Because He Is A Youth.
*Scrap 1999 Constitution, Adopt 1963 Republican Constitution

Prof. Itse Sagay (SAN), Chairman of the Presidential Advisory Committee Against Corruption (PACAC) in this interview with TEMIDAYO AKINSUYI of IndependentNGR, speaks on defections across party lines, secessionist agitations and other issues. Excerpts:

There has been gale of defections from the opposition Peoples Democratic Party (PDP) to the APC in recent times, the latest being Governor Bello Matawalle of Zamfara state. Do you see this as a welcome development for APC ahead of the 2023 elections?

On the issue of defections, I am extremely dismayed and troubled by that. I am also very displeased with the APC for accepting all these people. These are opportunists who want to use the chance of joining APC to continue to remain in power and remain relevant. They are totally unprincipled people and the APC itself is a highly unprincipled party for accepting people like that. Why should a governor who has contested and won election as a PDP man, why should we allow him to cross over to APC? That is an affront on the majority of voters who voted for him. For me, it is a very bad situation and it is not good for the image of the APC. On each occasion, opportunism will carry the day, the people who have gone out to cast their votes will be terribly disappointed with such developments. I am particularly disappointed in the Yobe governor, Mai Mala Buni, who is the APC caretaker chairman. He was put there to organise a convention. Up till now, he has not succeeded. Instead, he is going about buying PDP people to join APC. That to me, is unprincipled and it is embarrassing to me as a supporter of APC.

The Nigerian Police that the Pro- Yoruba nation rally cannot hold and many Nigerians believe this is a violation of their fundamental human rights, which is the prohibition of freedom of association. What is your take on that?

As a country, we have a culture and constitution which permit rights of freedom, free speeches, rallies and so on. That aspect will definitely support Sunday Igboho’s attempt. But we also have a superior provision which stated that if any of these exercise of rights is going to land the country in a position which is prejudicial to the health of the people of the country, to the security of the nation and other number of things along that line, then this exception will be superior and the exercise of that right can be stopped. So, it all depends on the perception of the authorities on the nature of the rally or the likely nature it is going to take. If they feel it is going to result in the breach of security, then they may not allow it to go ahead. But if they don’t feel that way, they may allow it to go ahead as it is allowed under the constitution.

There has been outrage over the nomination of Lauretta Onochie as a national commissioner of the Independent National Electoral Commission (INEC) by President Buhari. A lot of Nigerians feel this is unacceptable as she is a card carrying member of the ruling party. Do you share that view?

Honestly, to be frank with you, I am a bit puzzled by the amount of angry noise and protestation that her appointment has raised. This is because being a member of a party should not be the basis of her rejection other than the character of that person. If you make me the chairman of INEC today, my support of APC will not stop me from doing the right thing. So, character matters and in this country, we have had people who are partisan and were given positions. They took the appointment and remain impartial. So, honestly I don’t see why there is so much hullabaloo about Ms Onochie. She is going to be sworn in and she is going to take an oath to carry out her duties impartially and in accordance with the constitution. I think when she finally gets to INEC, she should put on another coat, not a partisan one.

Governor Yahaya Bello of Kogi recently said many Nigerians who want a youthful president in 2023 are asking him to run. Do you think a northerner can still emerge in 2023 after President Buhari’s tenure?

If he wants to run, he knows what to do. But he should know that this time around in 2023, it is the turn of the South. The North is already completing its two terms in the current dispensation and it will rotate to the South. But if he wants to go against that understanding and run, let him do so and let’s see how much support he is going to get. If he says Nigerians need a youth as president, we have to select the youth we want, not anybody who can just jump in because he is a youth. Being a youth is not an automatic qualification for the presidency. So, he can do what he wants to do but nobody is committed to his line of thinking at all. I don’t know what record he is going to base his presidential ambition on.

Sir, there has been debate over whether Nigeria should jettison the 1999 constitution and revert to the 1963 constitution instead of the annual constitution review exercise being done by the national assembly. What is your take on that?

My own personal preference is that we should scrap this Constitution and adopt the 1963 Republican Constitution. That Constitution contained everything that is being agitated for now. If we had that, if we adopted it, with amendments here and there, to make it accommodate states that we have now rather than region, I think all these agitations will die down and everybody will be happy. What we have now is a unitary constitution parading itself as a federal constitution.